The menswear show took place on 24 June in a temporary venue erected on the grounds of the Parisian church, Val-de-Grâce.

Villa Eugénie's show space for Dior was comprised of two replica houses that were joined by a grassy lawn covered in 19,000 flowers, which doubled as the show's runway.

One of the two replica houses was a smaller-scale model of Dior founder Christan Dior's childhood Belle Epoque home in Granville, France. It showed the building's salmon pink exterior and decorative facade with red and white trimmings.

The other, Charleston Farmhouse, a replica model of the Georgianised 17th-century Sussex farmhouse once belonging to British painter Duncan Grant, featured typical Georgian characteristics and climbing plants across its exterior.

The two structures were organised at opposite ends of the temporary venue which was walled and draped in perspective imagery of trees, blue skies and ocean views to replicate the surroundings of the original homes.

Grass was blanketed between the model homes, much like the lawns of French and British country residences, to carve runway-style pathways between the meadow of  flowers at the centre of the venue.

After the show, the flowers were replanted across the grounds of Val-de-Grâce. 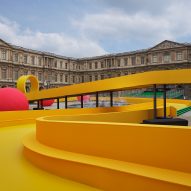 Guests were seated facing the meadow and model houses on grass-covered, bleacher-style seating.

In keeping with the show space's country and garden themes, the collection was similarly a presentation of garden-inspired looks.

Some models appeared on the runway wearing 3D-printed gardening hats shaped like pergolas, which were informed by Christian Dior's own garden pergola.

Outdoor and performance wear such as wellington boots, backpacks and compression shorts were layered with dusty-hued tailoring and bold prints in an ode to Duncan Grant.

Photography is by Adrien Dirand unless stated otherwise.