Palestinian studio AAU Anastas has completed the first phase of a restoration of a historic stone building in Bethlehem that emphasises the beauty of its "hosh", the central courtyard in Arabic architecture.

Located near Manger Square in Bethlehem, the Dar al Majous project is made up of several residential buildings, some dating back to the 18th century, which are now being converted for public use by the conservation non-profit ATS Pro Terra Sancta.

The 633-square-metre building will accommodate a gallery, shop and immersive projection room on the ground floor, an office and communal spaces on the first floor and a communal kitchen and terrace on the second floor.

As is typical for the city, the former houses share a common central outdoor area called the hosh, where residents used to cook, gather and meet, and which AAU Anastas wanted to celebrate with interventions that give a new perspective on the space.

The architects' main additions to this complex are a vertical circulation system in the form of a black steel staircase that cuts through the patinated arches of the hosh across all three floors, creating interesting geometric compositions, and a top-storey stone vault that will be completed in the next phase of the restoration.

"The staircase crosses the void hosh and goes beyond the plan in which it is inscribed to penetrate and expand the public space into the more private spaces," AAU Anastas co-founder Youssef Anastas told Dezeen.

"This penetration creates a contrast with the historical architecture in a clear way while offering a new perspective on the existing building."

The architects positioned the stairs to give visitors the chance to appreciate historical features, such as the building's arches and vaults, from up close and from unusual angles.

"While on the staircase, the visitors reach new three-dimensional positions in the void that offer new perspectives on the old structure," continued Anastas.

The graphic black lines of the staircase are echoed in other details around the building's internal courtyard, such as the door and window frames, balconies and balustrades.

The second major intervention, which will be undertaken in the next phase of the Dar Al Majous project in February 2023, is the addition of a vault covering the hosh and top floor terrace.

This will provide cover for a currently open part of the building while creating a new point of visual interest from the street, where Anastas says it will hint at the grandeur to be seen inside.

"The old city of Bethlehem is made of stone architecture that only reveals its richness in terms of vaults and shapes once you enter the spaces," said Anastas.

"At Dar al Majous, the new vault finishes the top floor of the building that was never completed, and as the building shifts to a public use, it reveals to the street pedestrians a low angle view of the richness of the vault's geometry." 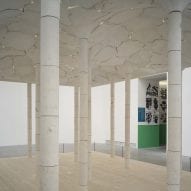 Spanning 11 metres, the vault will be created from 300 jigsaw-like stone pieces that together weigh approximately 50 tonnes and will be held in place by compression only.

The architects will create it using a similar approach to that of their Venice Architecture Biennale project last year, wherein the pieces were individually as minimally curved as possible in order to cut down on waste and production time.

The arch was designed using a hanging model and then adjusted to give it more lift, and it will be supported by a mix of new and existing structural elements.

AAU Anastas' work on Dar al Majous also involved restoring parts of the existing building, using lime mortar to smooth some of the vaulted ceilings while preserving the historical patina in others.

The firm also produced much of the furniture for the space through its design studio Local Industries, which works with Palestinian artisans.

This includes a series of tiled indoor and outdoor tables coloured with what look like oversized paint splodges, made in collaboration with an artisan from the village of Nisf Jbeil in the north of Palestine.

AAU Anastas sees the overall restoration as a sensitive response to a city that has "no iconic architecture," yet many historic buildings that require an "unforgiving respect".

"Its inherent nature does not call for an iconic complex of untouchability and protection of historical structures," said Anastas. "For us, the architecture of typologies that Bethlehem is made of calls for adaptability for transformation."

"The project responds to that by being quite radical in the way the intervention is placed in the historical building while being humbled by the existing spaces," he continued.

"The staircase, for instance, is a sculptural piece inserted in a historical building yet creating a new three-dimensional route that values the generous historical structure."

Founded by brothers Yousef and Elias, AAU Anastas is based in Bethlehem and frequently works with stone, running an ongoing experimentation-based research project called Stonematters.

In addition to the Venice Architecture Biennale installation, its previous projects include a gift shop extension to a 12th-century monastery in Jerusalem and a tower pavilion assembled from curvy blocks at London's V&A museum.

The photography is by Mikaela Burstow.