Recycled-plastic products by designers including Max Lamb and Studio Toogood feature in the N*thing is Possible exhibition in Singapore, which showcases hospitality brand Potato Head's attempts to eliminate its landfill waste.

On top of each pile of rubbish are pieces of furniture and accessories made from the respective waste materials.

Products include a colourful, recycled-plastic chair by British designer Lamb, as well as outdoor furniture by London-based Studio Toogood woven from strips of green plastic made from recycled bottle caps.

Other products on show include stools by Spanish designer Andreu Carulla that are wrapped in a material made from waste polystyrene and sawdust, and rugs by various designers made from discarded hotel linens.

There are also trays, toothbrush holders, tissue boxes and soap dispensers made from a mixture that includes polystyrene and crushed oyster shells.

Each of the products on show was created for Desa Potato Head, a high-end resort in Bali that started as a beach club and has grown to become what the brand calls a "creative village" featuring hotel buildings by Indonesian architect Andra Matin and a recent addition by OMA.

Potato Head uses waste from its resort to make the products and also sources additional material from other companies and organisations across Bali to prevent it from going to landfill.

The exhibition, which was launched during Singapore Design Week and runs until 25 December 2022, iss intended to showcase Potato Head's mission to promote what it calls a "zero-waste lifestyle" without compromising on the hospitality experience it can offer its guests.

"So we started with this notion of 'good times'. And what we realised is good times are made better when you do good. So we don't want to ever sacrifice the experience people can have, we just want to show them that it can be done in a different way."

As well as the products made from man-made waste materials, the exhibition features furniture and accessories made from natural materials, which all feature in the hotel rooms at the Desa Potato Head resort in Bali.

Lamb created a range of ceramics made from Balinese red clay and volcanic sand while a ring of bamboo chairs, also designed by Lamb, has been suspended from the ceiling of the space.

At the centre of the exhibition is a cylindrical structure made from repurposed wooden shutters, which also adorn the facade of the beach club at Desa Potato Head. Inside, a timeline charts the company's attempts to reduce the amount of its waste that goes to landfill.

According to Potato Head's internal audits, it has managed to reduce this from over 50 per cent to just five per cent over four years.

It has achieved this through a number of measures, including working with its suppliers to reduce packaging, banning single-use plastics from its site and recycling or repurposing as much of the remaining waste as possible.

The exhibition aims to highlight Potato Head's failures as well as its successes, including when the proportion of its waste going to landfill shot up during the Covid-19 pandemic due to staff shortages and logistical issues. 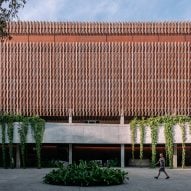 "We're really trying to change the hospitality industry and the tourism industry from what is a big waste producer," said Pestridge.

"You just have to be super open, honest and transparent about the things you have to try and solve. So what we want to do with this exhibit is really show the hits and the misses and things we got right and things we got wrong."

The exhibition continues outside, with a series of posters hung on the walls of the National Design Centre's external staircase.

These, which Potato Head calls its "blueprint", go into more detail about the methods and processes the brand has used to reduce the amount of its waste that goes to landfill.

According to Pestridge, the brand wants to work with other hospitality companies to help them reduce their own waste.

"We think this should be open source," Pestridge said. "So the blueprint is actually how we got here and we want everyone to take that and to come to talk to us about it. Because we're so small in the bigger scheme of things but hopefully we can inspire other companies to go down a similar path."

The images are courtesy of Potato Head. The video is courtesy of OMA and features a thumbnail image by Studio Periphery.

N*thing is Possible takes place from 16 September until 25 December 2022 at the National Design Centre in Singapore. See Dezeen Events Guide for an up-to-date list of architecture and design events taking place around the world.