Weathered-steel balconies with cascading plants wrap the skylit atrium at the centre of this office in Brisbane, refurbished by Australian studio Cox Architecture.

Named Midtown Workplace, the office occupies the top nine floors of a development that has been created by merging two separate towers in the Australian capital into a single building.

The project has been shortlisted in the large workspace interior category of Dezeen Awards 2022.

Using the idea of connectivity between the two towers as a starting point, Cox Architecture created a stepped concrete auditorium at the base of the office called "The Pit", with bridge links above based on the idea of an internal high street.

"The tower is a story of two halves, two existing towers connected as one, old structures connected with new," said the studio.

"Our approach to the workplace celebrated this, with the void and bridge links positioned as the connecting piece between two existing towers," it continued.

At either side of Midtown Workplace's central, skylit atrium, the cores of the existing towers have been used to house circulation and smaller meeting rooms, surrounded by areas of flexible workspace.

Banks of desks and booths are complemented by more informal seating areas at different points along the office's "high street", such as benches installed alongside planters and stools overlooking the atrium.

"The new workplace explores an alternative to standard workspaces, creating a diverse and blended model that is supported by a high proportion of hackable, collaborative areas," said Cox Architecture. 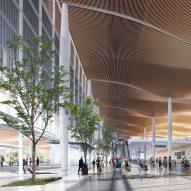 "Thirty per cent of the primary work points are moveable, affording teams complete autonomy and control over their workspace," it continued.

In The Pit, curved concrete amphitheatre-style seating dotted with planters faces a presentation space with views of the city as its backdrop. It is overlooked by all of the atrium's balconies, creating a "magnet for cultural exchange."

The bare concrete is complemented by exposed metalwork and services across the office ceilings.

Other projects that have been shortlisted in the large workspace interior category of Dezeen Awards 2022 include the Design District Bureau Club in London by Roz Barr Architects, and the Dyson Global HQ in Singapore by M Moser Associates.

Elsewhere, Cox Architecture is currently developing an airport in Sydney with Zaha Hadid Architects and recently completed The National Maritime Museum of China, which features a cluster of hull-like roofs.