China's first National Maritime Museum is located in the Binhai New Area. This wetland area has been recovered from the bay and extensively developed over the past decade.

Cox Architecture won a 2013 international competition to design the museum, which has been six years in the making.

Across an area of 80,000 square metres, the museum houses six display areas and 15 exhibition halls.

Diamond-shaped panels of silver aluminium cover the exterior of each form, with some perforated and others solid.

The underside of the of the roofs deep reveals –  designed to cope with heavy snowfall in winter – are lined with of wood.

Landscaped areas create a new series of promenade-like routes along the bay, sheltered by the cantilevering forms of the museum.

Winding paths that cut through its wooded parkland surroundings and extending into the bay with two long jetties.

Rather than a single, monolithic structure, Cox Architecture broke the museum down into a cluster of long, thin pavilions, that project towards the bay like upturned hulls of large ships. 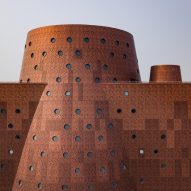 "Jumping carp, corals, starfish, moored ships in port and and open palm reaching out from China to the maritime world."

This "open palm" arrangement is focused around a central glazed reception hall, providing access between the three exhibition levels and lower-level storage areas, creating a dramatic visual axis through the building and out towards the bay.

Inside the wings, each of which is dedicated to a particular exhibition theme, a ribbed steel structure creates a dramatic space alongside the core areas housing exhibitions and circulation.

A stone floor and white walls create bright, open atrium spaces, overlooked at the upper levels by balconies in contrast to the more enclosed exhibition halls.

"The articulated pavilions provide a constant connection between inside and out," said the practice. "The user experience exists within the landscape and is a key organising device of the plan, helping to orientate visitors on their journey."

Cox Architecture was founded by Philip Cox in Sydney in 1967. The practice recently revealed designs for a new airport in Sydney designed with Zaha Hadid Architects.

The National Maritime Museum of China joins several other interestingly-shaped public buildings in the city.

Bernard Tschumi Architects has designed a copper-coloured museum in Tianjiin shaped like a factory with chimneys, and MVRDV built a public library shaped like a giant eyeball.

Photography is by Terrence Zhang.