Architecture studio Snøhetta has announced its plans to restore and modernise The Natural History Museum of Lille by adding a public-oriented extension that references the city's traditional architecture.

Snøhetta's addition to the 19th-century French museum will see it connect the three arms of the existing E-shaped building.

The extension, or spine as the studio is labelling it, is designed as an interpretation of Lille's historic and traditional buildings – incorporating a brick facade and a wood-lined interior with floor-to-ceiling glazing.

As part of the project, Snøhetta will also remove the Natural History Museum's recent extensions and restore the building's original 19th-century facades.

The spine will unify the science-focused museum's existing exhibition spaces, permanent collections, storage and technical areas while also upgrading its accessibility and circulation for both staff and visitors.

"In such a significant city with long-established traditions within culture and arts, we are excited to work on a project which is paying homage to and respecting the heritage as well as looking ahead," said Snøhetta co-founder Kjetil Trædal Thorsen.

"Through our design, we aim to revitalize the museum as a landmark and aspire to find the most sustainable solutions, contributing to the City of Lille's sustainability goals."

Around the extension, the museum's courtyards will be transformed into accessible gardens that aim to tie its outdoor spaces to the exhibitions. Floor-to-ceiling glazing will offer views out to the gardens, which will be lined with trees to create cooling spaces at the centre of the site.

New welcome spaces and areas for young children, created in collaboration with exhibition designer Adeline Rispal, will also be introduced.

According to Snøhetta, the aim is to create a "museum of the future".

"Designed in collaboration with the renowned exhibition designer Adeline Rispal, they will be flexible and adapted to new display methods associating transversality with a holistic approach to science," said the studio. 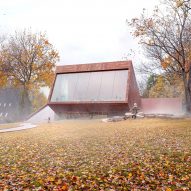 Temporary exhibition spaces will allow the museum to easily install a number of different shows, providing visitors with new experiences.

"While the museum is a place where one dreams, grows and learns, it is also a tool that must enable the efficient management and upkeep of the thousands of pieces in its collections."

According to Snøhetta, the overhaul will introduce high-performance insulation, photovoltaic panels and rainwater harvesting systems as part of a wider effort to make the museum's operations more sustainable.

Elsewhere, Snøhetta recently revealed its design for a Tokyo skyscraper titled Shibuya Upper West Project, which was designed to be "a sanctuary of peace and relaxation in the bustle of the city".

The architecture studio has also announced its plans to add a sky-facing auditorium to the Kon-Tiki Museum in Oslo as part of the museum's redesign.

The renders are courtesy of Snøhetta.