Sportswear brand Adidas has dropped its Yeezy collaboration with Kanye West, officially known as Ye, stating it "does not tolerate antisemitism and any other sort of hate speech" after the rapper posted offensive comments on social media.

Ye had both his Instagram and Twitter accounts locked earlier this month after he posted antisemitic comments on the platforms. The sportswear brand has now terminated its partnership with the rapper over the comments.

"Adidas does not tolerate antisemitism and any other sort of hate speech," the company said in a statement today.

"Ye's recent comments and actions have been unacceptable, hateful and dangerous, and they violate the company’s values of diversity and inclusion, mutual respect and fairness."

The brand had worked with the artist since 2015 when it launched its Yeezy Season 1 collection of clothes and footwear (pictured).

Adidas added that it will cease the Adidas Yeezy business with immediate effect and "stop all payments to Ye and his companies". It will also end the production of Yeezy-branded products, it said.

The decision will have a "short-term negative effect of up to €250 million" on the sportswear company's net income, due to the high seasonality in the fourth quarter, it claimed.

The company also stated it is "the sole owner of all design rights to existing products as well as previous and new colorways under the partnership". 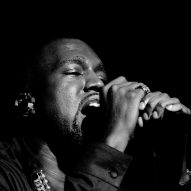 Adidas follows in the footsteps of fashion brand Balenciaga, which cut ties with West on Friday after the rapper published antisemitic comments on both Twitter and Instagram.

"Balenciaga has no longer any relationship nor any plans for future projects related to this artist," the fashion brand's parent company Kering said in a statement to industry magazine Women's Wear Daily.

Campaign Against Antisemitism among critics of Adidas

Adidas had received criticism on Twitter for not ending the partnership sooner. The UK-based Campaign Against Antisemitism said: "We are calling on Adidas to end its partnership with Ye, formerly known as Kanye West, due to his repeated antisemitic outbursts."

The organisation linked to a video showing Ye stating: "I can say antisemitic things and Adidas can't drop me."

Adidas had previously put its collaboration with Ye under review after he claimed the company "stole" his designs and wore a T-shirt saying "White Lives Matter", an expression that is categorised as a hate statement by the Anti-Defamation League.