Due to an increase in its activities, the Anahuacalli Museum decided to expand its footprint into the adjacent park, adding additional structures to the original buildings designed by Riveria and O'Gorman.

Taller Mauricio Rocha added three buildings that hover above the volcanic ground of San Ángel, a neighbourhood in the south of Mexico City, as well as a courtyard and walkway that connect the new structures to the original facility.

All of the structures added by the studio are low-lying – similar in height to the other museum buildings, except for the castle-like main structure that once held Rivera's studio.

"Achieving the extension implied an open dialogue with the architecture preexistent with a contemporary interpretation and the great challenge of building in the ecological reserve, which is one of the few examples where its ecosystem has not been altered," said the studio.

"The intervention manages to be a linker and not an aggressor."

The original design of the museum set the buildings around an open square.

Taller Mauricio Rocha's three buildings are on the west side of the property and include a storage building, a workshop and offices.

With volcanic bases that cantilever the structures above the ground, each building opens up onto the new courtyard.

The warehouse – which doubles as a performance space – and the workshop are both square in shape, while the office building is long and extends away from the original courtyard.

The base of the buildings is clad in volcanic stone, similar to the original structures, but the inhabitable one-storey levels are clad in dark louvres that open the spaces up to the natural environment, augmented by a series of gardens placed around the structures.

At certain points, the voids under the cantilevered structures create shaded semi-enclosed patios.

Two of the buildings feature voids that were designed to open up the program. These voids were also filled with plants and serve as "open-air workshops", according to Taller Mauricio Rocha.

"The buildings are recessed in their base to achieve less impact with the landscape, the materiality of the new buildings with concrete and volcanic stone slabs in their base," said the studio.

The latticed walls of the exterior were machine-cut and the floors and ceilings are made of concrete. Dark-stained wood lines some of the interior corridors and was also used to make the doors.

The materials employed by Taller Mauricio Rocha continue the dark, volcanic palette of the original structures but have a more open program than the densely packed stone of the originals.

As part of the project, select renovations to the existing structures were also carried out by the studio.

The old warehouse was converted into a maintenance area, the administrative areas became a cafeteria and a shop, and the studio created museographies and other exhibition enhancements. 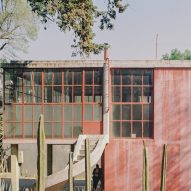 Before Taller Mauricio Rocha's intervention, thousands of works of pre-Hispanic art that Rivera accumulated during his lifetime were stored away, but the new buildings allow many of these pieces to be seen by the public.

"The Anahuacalli Museum is a place that provides a large public space in addition to offering the last period of Diego Rivera and the collection of his pre-Hispanic pieces that he donated to the people of Mexico," said the studio.

Other works that combine the old and the new in Mexico include Estudio MMX's Progreso Museum of Geology, which uses Mayan building techniques and materials in a modern context.