Craftspeople from rural communities were paired up with designers to create a selection of collectible design pieces for Design Week Mexico 2022.

Showcased on a pedestal at the National Museum of Anthropology in Mexico City, the exhibition features work that was produced under Design Week Mexico's Vision and Tradition residency program for artists and designers.

Designers were tasked with formulating an object that would then be created through the techniques of the craftspeople, many of whom work with traditional methods and materials.

Each year a guest country is invited to submit designs alongside the designers from Mexico. For 2022, Brazil was selected as the guest country.

A town or region of Mexico is also specially selected each year to bring its artisanal tradition into the spotlight.

Metepec, in the State of Mexico – the region adjacent to the federal district of Mexico City – was chosen for 2022, with all the craftspeople hailing from the town or from those nearby.

The aim was for the artists and artisans to create "a piece that generates a dialogue and shows the importance of the residence as a platform for intercultural development", according to Cesarman.

The residency used various collaborative arrangements to create the works, based on proximity and restrictions introduced during the pandemic.

One arrangement was a face-to-face collaboration, where the designers visited the artisans' workshops.

Among the pieces that were created by designers who met the craftspeople in person were woven products developed by Mexican designer José María Balmaceda with artisans from Calimaya, State of Mexico.

Together, they created mohair textile works by combining traditional techniques and modern technology.

The exhibition also showcased existing programs that aim to "strengthen crafts" and their relationship to the design market.

Longer-term collaborations that show how the process can turn into durable design brands were also on display, including the work of Mexico City studio Ad Hoc, which also helped curate the whole exhibition.

The studio works with papel picado – a papercutting technique – to create modern leather home goods that draw on traditional designs, including wooden side tables with leather faces featuring the decorative designs. 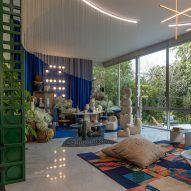 Finally, the showcase also explored the potential of digital communication. The curators wanted to see "how virtual processes can be linked" to the same design processes, according to Cesarman.

This led to some challenges, such as gaps in communication between the designers speaking different languages from the craftspeople they were assigned to work with.

Among these collaborations was a project by Mexican artisan Francisco Huazo Cedillo and Mexican designer Naso Vargas, who created a series of ceramics together.