Due to open in autumn 2026, the venue will be developed by Populous to pay homage to the history, heritage and architecture of the Bills' home city, Buffalo.

"The stadium will create a new place to foster the iconic culture of the Bills fan base, while creating an exciting vision for the future of the franchise and the community," explained Populous senior principal Scott Radecic.

"As we continue to work with the Bills, we look forward to creating an industry-changing stadium that reflects Buffalo's strong community and history."

Stadium to will have stacked seating

The Buffalo Bills stadium is set to be built adjacent to Highmark Stadium – the team's current venue – in the town of Orchard Park in southeast Buffalo.

Its current design was revealed in new visuals by the studio and centres around a stacked seating bowl, which is designed to "enhance crowd noise" while being intimate and sheltered.

Around its edges will be large areas carved out for Buffalo Bills fans, featuring a mix of local food and drink vendors.

According to Populous, the stadium's design is intended to have a contemporary aesthetic and "football-first environment", while reimagining historic and iconic architecture in Buffalo with modern materials.

The studio said its reference points include the Rockpile, the city's former outdoor soccer stadium, as well as Kleinhans Music Hall and a multipurpose indoor arena known locally as The Aud.

"Our approach to the design takes its cues from historic architecture in Buffalo, such as 'The Rockpile', 'The Aud', and Kleinhans Music Hall," said senior principal Jonathan Mallie.

"[It] merges their projection of strength with modern materials and a building form that is set to create an intimate and intimidating football-first environment." 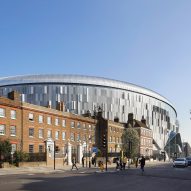 Populous completes "best stadium in the world" for Tottenham Hotspur

Founded in 1983 by Gyo Obata, George Kassabaum, George F Hellmuth, Populous is an architecture studio best known for its design of landmark sporting and music venues.

Alongside the new Buffalo Bills stadium, it is currently developing a solar-powered arena in Munich with a decorative exoskeleton, and a spherical music venue in London that will contain the capital's largest indoor venue.

It recently completed the Ice Ribbon, the only new building created for the Beijing 2022 Winter Olympics, and the Tottenham Hotspur Stadium, which has a retractable pitch.

The visuals are courtesy of Populous.