As part of the Design Academy Eindhoven student show at Dutch Design Week, graduate Jelle Seegers has presented a smelting machine with an oversized magnifying glass that focuses the sun's heat to melt metal more sustainably.

The Solar Metal Smelter features a large lens that is manually moved to follow the path of the sun and direct its heat into a crucible holding metal. Once liquid enough, the metal can be cast into a sand mould and made into a variety of products.

Seegers is a self-described maker, who uses the smelter in his own workshop and proposes it as a solution for metal casting companies looking to save the emissions and spiralling energy costs associated with powering industrial furnaces.

"By making this thing manual, it really changes the casting craft from one where you just have endless energy coming into your workshop to one where you personally cooperate with the sun in order to melt the metal," he told Dezeen.

Seegers was moved to create the project, his final-year bachelor's work, after undertaking an internship at a casting company and realising what an "enormous" amount of energy is used there.

He arrived at the concept of the Solar Metal Smelter after he remembered using a magnifying glass to make fire as a child. Compared to all the other methods of heating something, this seemed to him the most efficient.

"But if you just take the sun's heat, and you only bend it and direct it, you don't need to do this complex conversion to electricity. And for that reason, you can achieve an efficiency of about 95 per cent."

The lens of the Solar Metal Smelter, which measures approximately five square metres, is attached to a machine to enable it to be moved directly underneath the sun throughout the day. It takes a small turn of a hand crank every five to ten minutes to move the lens along a track to its ideal position.

Seegers integrates this action into his wider process, usually working on an adjacent table to make his sand moulds and stopping periodically to turn the crank.

While this movement might be automated in future, the designer values the manual approach as a way of rethinking our relationship with energy. 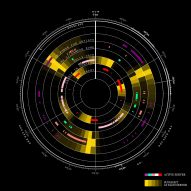 Solar Protocol network explores the potential of a solar-powered internet

"We're now in this energy transition," said Seegers. "We're going more towards wind power, solar power, all these things but we're not changing our mentality on how we use energy."

"I really advocate for using energy when it's there and in the shape that we get it," he added. "For example the sun's heat, we can use it as heat and as light during the day."

Seegers made the lens himself from a sheet of polycarbonate, using a machine he constructed himself to cut ultra-precise circular facets in the material. The rest of the machine he made from durable stainless steel he found at scrapyards or obtained secondhand.

The Solar Metal Smelter produces about four kilowatts of energy at a temperature of about 800 to 1,000 degrees Celsius and can melt a maximum of 20 kilograms of zinc or five kilograms of aluminium at one time.

The largest object Seegers has produced using this process to date is a flywheel for one of his other machines. But he plans to make a bigger version of the smelter that could potentially be sold to casting companies.

He also wants to continue to develop his own practice, eventually having a manufacturing process for his workshop that runs completely on solar, wind and human power.

In addition to the Solar Metal Smelter, he has already produced the Human-Powered Tool Grinder – a foot-powered machine also made of scrap materials, which keeps the hand tools in his workshop sharp enough so they can be viable alternatives to electric ones.

At the Design Academy Eindhoven graduation show, the Solar Metal Smelter was awarded the school's Melkweg Award, which is given to "the most striking and outspoken talent with a bachelor's project full of potential and originality".

Another recent project that advocated working creatively with the limitations of solar energy is the Solar Protocol, a solar-powered network for accessing the internet.

Photos are courtesy of Jelle Seegers unless otherwise stated.

The Design Academy Eindhoven graduation show was on show from 22 to 30 October as part of Dutch Design Week 2022. See Dezeen Events Guide for an up-to-date list of architecture and design events taking place around the world.