Dezeen has been shortlisted nine times for publishing awards at three different ceremonies next month.

Dezeen is also shortlisted in the Editorial Brand of the Year category for the 2022 edition of the annual awards programme, which is organised by the International Building Press (IBP). The winners will be announced at a ceremony on 17 November. 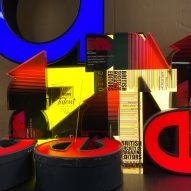 We are in the running for Business Publication of the Year and Independent Publishing Company of the Year, with the winners due to be announced on 25 November.

Dezeen editor Tom Ravenscroft is also shortlisted for Editor of the Year in two categories at the annual awards ceremony organised by the British Society of Magazine Editors (BSME), which takes place on 29 November.

The nominations come after Dezeen celebrated its 15th birthday in 2021 with 10 award wins and record-breaking traffic.

Innovative initiatives recognised by this year's nominations include our Dezeen 15 digital festival, which invited 15 creatives to propose ideas that can change the world over the next 15 years, and our Redesign the World, Future Mobility Competition and OLEDs Go! design contests.

Editorial projects recognised include our deconstructivism series, which profiled the architects and buildings of one of the most influential architecture movements of the 20th century, and our series to mark the anniversary of 9/11, which looked at the impact the atrocity had on skyscraper design and architecture around the world.

Dezeen's own awards ceremony will also be taking place next month, with the winners of Dezeen Awards 2022 set to be revealed at an event in London on 29 November.

Dezeen Awards celebrates the world's best projects and studios in architecture, interiors and design. Earlier this month, we announced the winners of the Dezeen Awards 2022 public vote, while this year's shortlists were published in September.