The Dryland rug records four different consequences of drought – dehydration, loss of crops and animals, land subsidence and wildfires – and how they have impacted one particular region of the Netherlands.

Cobelens associated each of these consequences with a different manufacturing or processing technique in order to build up the finished rug.

She created Dryland as her final-year project at the Royal Academy of Art in The Hague, after witnessing the damage that worsening droughts had wrought on Dutch landscapes during her trips home from university.

"I was thinking what kind of product or material is the best way of showing a landscape problem," Cobelens told Dezeen. "And then I came across tufting, which kind of gives a symbolic sense of how plants grow."

"From then on, everywhere I looked in the landscape, I saw rugs," she continued.

Cobelens started by creating a machine-tufted rug that resembles a physical map of the Deurnese Peel region in Brabant – an area close to where the designer grew up that is protected under the EU's Natura 2000 programme.

The rug is made up of colours that echo the grassy landscape and features a pattern that reflects its rivers and streams alongside human-made canals and ditches. 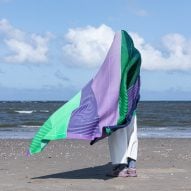 As these canals and ditches were built to allow water to drain faster towards the sea and keep the land favourable for farming, Cobelens says they now exacerbate its dehydration under drought conditions.

"You can imagine that because not enough rainwater is flowing towards our groundwater in the near future, it will be under pressure," she explained.

Based on real water maps, this pattern of waterways is rendered in loop pile tufting, with blue thread added into the mix to give it a watery hue.

The rug's main sections are made of grassy heaps of cut pile tufting in several shades of green to explore the issue of subsidence.

Each section was manufactured to different heights, with lower pile heights symbolising less water under the ground.

Particularly in peat bog areas such as the Peel, this can lead the ground to cave in while causing problems such as bumpy roads and sinking houses.

For the other two themes, loss and burning, Cobelens finished the rug by hand after the machine fabrication process was over.

To explore the deadly impact of drought on plants and animals, Cobelens cut away areas of the rug using electric sheep clippers, creating shorn patches.

She also scorched sections of the rug with a blowtorch to reflect the course of a 2020 wildfire that took two months to get under control. 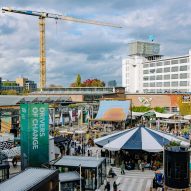 Since graduating a year ago, Cobelens has continued the Dryland project by initiating discussions around its themes and has made a series of related pieces that were exhibited together in Eindhoven for this year's Dutch Design Week.

In addition to the rug, there is a smaller tapestry and three stools with tufted seats, which symbolise the landscape in different stages of dehydration ranging from healthy and green to barren and sparse.

Another design studio that has attempted to visualise environmental destruction through textiles is Raw Color, whose Temperature Textiles collection recorded climate-change data in blankets, scarves and socks.

Dryland was on show from 22 to 30 October as part of Dutch Design Week 2022. See Dezeen Events Guide for an up-to-date list of architecture and design events taking place around the world.