Conceptual art collective MSCHF has modelled an exhibition at Perrotin gallery in New York City on a shopping mall that contains works such as the Wavy Shoes and a fridge full of cans of an LSD-like substance.

The exhibition, called No More Tears I'm Lovin' It, showcases a variety of objects developed by the collective in a format that adheres to the organisation of a mall with distinct areas such as "Gamestop", "Footlocker" and "Pawn Shop".

The collection aims to show the diversity of MSCHF's output, which ranges from conceptual art and statues to design objects and video game production.

"[The] shopping mall format becomes a frame that can contain a collection of works that reference multiple industries and, formally, diverge widely from one another, and roots the show in MSCHF's commercial-native practice," MSCHF told Dezeen.

"We see throughlines between these materially different outputs, and we think of many of our works as a kind of consumerist performance art, that plays out in the widest public sphere possible."

The works include Drink Me, a fridge stocked with cans that contain a "functional analogue" of LSD called 1P-LSD, a research chemical with "weaker effects".

"All of the seltzer contained within Drink Me exists legally but would become illegal at the moment of human consumption," said MSCHF.

Other works include a collection of swords that the collective created by asking people to send in guns that were then melted down and shoes that take classic silhouettes and turn them into "wavy" copies of the original, something that has landed MSCHF in legal trouble.

"At the time of this writing, the legal proceedings between MSCHF and Vans are ongoing in the United States Court of Appeals for the Second Circuit," said MSCHF.

"In response to the case, MSCHF has extended its Wavy Shoes series to include six other classic shoe silhouettes from other major sneaker companies."

A series of tech-oriented pieces were also included in the exhibition.

These included a machine with a pen attached to a mechanical arm that records and writes down things being said around it, a series of cellphones with the numbers of celebrities and a "chair simulator" video game.

Also present at the exhibition is a Damien Hirst artwork that was purchased by the collective to be sliced up and resold.

In the past, the collective has been mostly digital, showing works and releases online, and the gallery represents the first solo exhibition for MSCHF. 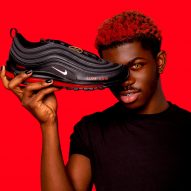 "In some ways, to show art in a gallery comes from the same impulse: it is another sphere that we can play in," said MSCHF.

MSCHF also said that though there is humour imbued in the work, they do not consider themselves pranksters.

"While a specific sense of humor is core to MSCHF, we do not think about our own work in the terms prank/stunt/etc," it said. "MSCHF deals in the absurd, and in the ridiculous intensification of the present."

In 2021, MSCHF collaborated with American musician Lil Nas X to create a series of Nike trainers filled with human blood, for which the American shoe company then sued MSCHF.

Other conceptual installations around the world include a solo exhibition by Maxim Zhestkov in London that features "digital motion sculptures".

No More Tears I'm Lovin' It is open at the Perrotin Gallery in New York until 23 December 2022. For a comprehensive listing of architecture and design events, exhibitions and talks see Dezeen's Event Guide.

The photography is courtesy of MSCHF.