Architecture studios Maat-Ontwerpers and Bart Lens have created a cycle path called Cycling Through the Heathland as part of a tourism cycling network through the Belgium province of Limburg.

Located in the Hoge Kempen National Park, the cycle path cuts through the Mechelse Heide heathland – one of the largest areas of heathland in Flanders. The project has been shortlisted in the landscape category at Dezeen Awards 2022.

Built for tourism organisation Visit Limburg, the cycle path is four kilometres long and includes a 300-metre-long wooden bridge, which offers panoramic views of the surrounding heathland and pine forests.

"This cycle path is the third in a series of innovative cycling projects which enable the unique Limburg landscapes to be experienced via the cycle node network," said chair of Visit Limburg Igor Philtjens. "With this new experience, we are demonstrating that Limburg continues to innovate in cycling tourism."

Other cycling experiences created in the province include a 200-metre cycle path that leads cyclists through a pond and a 700-metre elevated track that allows users to cycle up to 10 metres high between trees.

The project lies within the context of a strategy called Cycling Synergy whereby unique cycling experiences allow visitors to enjoy Limburg's landscapes in a slightly different way and which provided an economic relaunch after the closure of car manufacturer Ford Genk in 2014.

The Hoge Kempen National Park is a habitat for the smooth snake, a protected species which is dependent on well-managed heathland. To reduce the impact on wildlife and especially the smooth snake, no lighting was used during the construction process and all works were discontinued during the main breeding season. 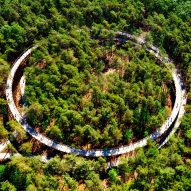 Black asphalt was replaced with grey concrete which heats up less quickly, reducing the risk of snakes sunbathing on the cycle path.

The 300-metre long cycling bridge is the main feature of the project. Similarly to a roller coaster structure, the bridge is made up of interwoven timber columns and beams that cradle the concrete cycle path in the middle. In recognition of Limburg's mining heritage, local pine wood, which was once planted to fulfil the demand for wood for the coal mines, was used for the high walls on either side of the bridge.

The path, which gradually ascends, leads to a 30-metre plateau with panoramic views of the national park and its vast heathland and pine forests.

In order for the bridge to not act as a barrier for wildlife, the foundations were laid on individual footings rather than one long beam to allow small animals to migrate undisturbed.

Cycling Through The Heathland is shortlisted for a Dezeen Award against projects including Little Island park and performance venue by Heatherwick Studio and a wilderness garden and amphitheatre in China by landscape studio Z'scape.

The photography is by Frank Resseler.