Austrian design studio March Gut has created a modular storage system as a "simple and stylish" solution for stowing bicycles in the workplace.

Designed by March Gut in collaboration with photographer and racing cyclist Jürgen Grünwald, Urban Wood Systems (UWS) Base places bicycles at the centre of the office space in a bid to encourage more workers to decarbonise their commute.

"The bicycle is indispensable as we strive to switch to climate-neutral mobility," the Linz-based studio told Dezeen. "Maybe [we] can convince more people to ride their bicycles to work."

The streamlined form of UWS Base means that bicycles can be hung and dried without contacting the floor or wall.

Constructed from two halves of rounded ash that are secured between the ceiling and floor, up to two standard bicycles at a time can be hung by their wheels from its storage bars.

It has been described by the studio as a "space-saving wardrobe" for bicycles.

"UWS Base combines high functionality with a special demand for aesthetics and sustainability," said the designers, who approached its design as a piece of furniture. "It differs from existing storage systems in bringing bicycles closer to people."

The product takes minutes to assemble and can be expanded to include a storage table and additional storage bars for helmets and other cycling accessories. When not holding bicycles, it doubles as a coat rack. 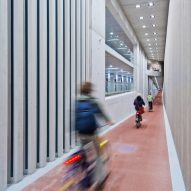 UWS Base is manufactured by a joiner in Scharnstein, Upper Austria, and all components are produced in the region.

It comes in a choice of natural, black and neon orange colourways and is suitable for rooms that are between 220 and 300 centimetres tall.

Founded by industrial designers Christoph March and Marek Gut, March Gut has previously designed a wine tavern with stepped seating on its roof and a socially distanced serving tray for dining out during the Covid-19 pandemic.

UWS Base has been shortlisted in the workplace design category of this year's Dezeen Awards. Other design projects in the running include a brick made almost entirely of construction waste and an armchair that helps elderly users stand up safely.

The photography is by Jürgen Grünwald.