In this talk filmed by Dezeen at V&A Dundee for The Dalmore, Japanese architect Kengo Kuma explains how creating a whisky with the Scottish distillery led him to find an affinity between architecture and whisky.

During the talk, which was moderated by Yoko Choy, China editor for Wallpaper*, Kuma described the similarities between the two professions.

"Whisky is very much related with nature itself," said the architect. "I believe architecture is the same. And through this collaboration, I learned many things about whisky. It's a very exciting process."

Kuma appeared on the panel alongside architect Maurizio Mucciola, with whom he designed V&A Dundee, and whisky makers Richard Paterson and Gregg Glass.

The event marked the launch of a partnership between V&A Dundee and The Dalmore called The Luminary Series, which pairs notable architects with whisky makers to produce limited editions housed in specially designed bottles. Kuma and Mucciola are the first participants in the series.

Kuma worked with Paterson to develop a rare edition of The Dalmore's 48-year-old single malt whisky limited to a run of only three bottles, each housed in a unique wood and steel sculpture designed by the Japanese architect.

One bottle is currently up for auction at Sotheby's, while the other two have gone to the V&A Dundee's collection and The Dalmore's archives.

Mucciola and Glass teamed up to create a more accessible collectible edition of The Dalmore's 15-year-old single malt, of which 15,000 are available.

During the talk, the panel discussed how the practices of architecture and whisky distilling complement one another, as well as the importance of cross-cultural collaborations.

Paterson highlighted the significance of wood in both professions, emphasising its centrality to whisky production.

"When we talk about wood in the whisky industry, it accounts for something like 80 per cent of what is going to give you the style, the consistency, but more importantly, that extra level of luxury," he said.

The barrels used to create the two whiskies combined both Japanese and Scottish oak to create a flavour that represented the cultural backgrounds of the collaborators.

"Wood is obviously something that is is very important for Kuma San's architecture," said Mucciola, who worked at Kengo Kuma and Associates before going on to set up PiM.studio Architects in London.

"Wood is also obviously very important for whisky making, the wood and the composition of the casks," he continued. "It's what makes the the taste of the whisky, makes it special. So we wanted to create something very special, which reflects this philosophy." 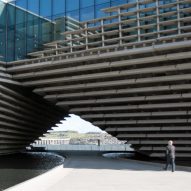 During the talk, the panel also emphasised how the collaboration represented a continuation of a tradition of cultural exchange between Japan and Scotland.

"Through the experience of designing V&A Dundee I learned the importance of exchange," said Kuma.

"Some exchange between different cultures gives me inspiration for the next project," he continued. "It's a kind of exchange – it's a collaboration with The Dalmore, but it's an exchange."

"Scotland and Japan have a history of exchange," he said. "Charles Rennie Mackintosh is a good example of this exchange. He didn't go to Japan, but he learned many things from Japan."

Mucciola went on to describe how cross-cultural experiences can enrich a designer's practice.

"[Exchange] makes us richer and makes our way of thinking, our approach to design and in general to life, much more complex and fascinating and interesting and opens our view to the sort of unexpected solutions which we can try to translate into our designs," he said.

The Dalmore is a Scottish whiskey distillery based in Alness. It was established in 1839.

V&A Dundee, Scotland's first dedicated design museum, opened on the waterfront of the River Tay in 2018. Dezeen filmed an exclusive video interview with Kuma to mark its opening. The museum has hosted a number of exhibitions and installations, including a colourful maze designed by Yinka Ilori.

This talk was filmed by Dezeen for The Dalmore as part of a partnership. Find out more about Dezeen's partnership content here.