Swedish design company Aarke aimed to bring a sense of refinement to countertop sparkling water makers with the Carbonator 3, a minimalist kitchen gadget that pays homage to Italian espresso machines.

Shortlisted in the product design category of the Dezeen Awards 2022, the soda maker adds fizz to still water via carbon dioxide gas canisters, presenting an alternative to bottled sodas.

To elevate the gadget's design and ensure a long lifespan, Aarke tried to emulate the same sense of heritage associated with traditional espresso machines as well as their use of solid materials.

The resulting object is compact, with a head that resembles the portafilter of a coffee machine attached to a single stainless steel column.

It has a CNC-machined stainless steel nozzle that the brand says is engineered to allow for a "smooth and precise" release of CO2.

The product was designed "from the inside out", according to Aarke, so that form follows function and every part serves a purpose. Even the nameplate serves a dual role, securing the tubing that allows excess water to travel safely through the inner chamber down to the drip tray.

Other details are aimed at improving safety and efficiency such as the rotational damper on the lever, which allows for a more controlled release of pressure within the bottle and a higher filling line.

The Carbonator 3 is cordless, needing only standard CO2 gas canisters and no electricity to function. These cylinders carbonate up to 60 litres of water each and can be refilled at speciality stores.

One of the biggest challenges in designing the product was creating its stainless steel enclosure, according to Aarke founders Carl Ljung and Jonas Groth. 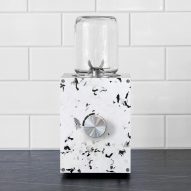 "The three-dimensional stainless parts are extremely hard to produce on a bigger scale without compromising quality and precision," said Ljung. "The shapes of the Carbonator are pushing metal craftsmanship to its limits."

To help ensure a long lifespan, Aarke's engineers built a dedicated device to tests the product's functioning across more than 10,000 carbonation cycles. This allowed them to identify and adapt parts that were potentially sensitive to repeated use.

Currently, only some of the gadget's parts are replaceable but the brand is aiming towards making the product more repairable.

Their most well-known competitor is SodaStream, a company that was founded in England in 1903 and is now owned by PepsiCo and headquartered in Israel.

Since it bought the company in 2018, PepsiCo has made a fizzy drinks dispenser for schools and offices that people can use with their own bottles.