British architectural photographer Marc Goodwin provides a look into architecture studios in Frankfurt in the second edition of his three-part series documenting architectural offices in Germany.

The series offers a look into eight architecture studios based in Frankfurt including the office of Schneider+schumacher, Crossboundaries, Apd architektur+ingenieurbüro and Max Dudler.

"This was a follow-up to the previous story in Berlin," Goodwin told Dezeen. "The German market is interesting because it is large and produces work of such a high standard but is perhaps less well known outside of Germany than might be expected."

"My next stop is Vienna to be followed by Swiss studios," he said. "The goal is to finally publish the book which I was on track for prior to Covid by the end of 2023." 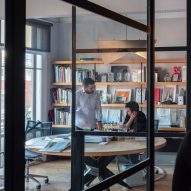 When asked about the project, Goodwin told Dezeen that this three-part series in Germany was one of his longest trips, compared only to his work capturing 27 Nordic architecture offices in 2016.

"It was one of the longest trips I have taken, comparable only to the Nordic studio's story that started me off on this adventure," he told Dezeen.

Goodwin is the founder of the architectural photography studio Archmospheres and has captured behind-the-scenes looks into architectural studios worldwide – including in Berlin, Dubai, Panama City and Beijing.

Goodwin and Archmospheres have also recently photographed a lakeside sauna and restaurant in Finland as well as Hopkins Architects' Khor Kalba Turtle Wildlife Sanctuary in the UAE.

Read on for a glimpse into eight architecture studios across Frankfurt:

In this space since: 2009
Number of members of staff: 25
Size: 250 square metres
Building's history: former factory for cardboard envelopes

In this space since: 2014
Number of members of staff: 8 to 10
Size: 120 square metres
Building's history: former apartment

In this space since: 1997
Number of members of staff: 42
Size: 1000 square metres
Building's history: former commercial and industrial building