Rubenstein Commons was designed to be a meeting place and office complex for visiting scholars to the institute, where scientist Albert Einstein once held a faculty position.

The studio created an interconnected series of asymmetrical volumes, punctuated by expansive planes of prismatic glass, to give the building a layout that would encourage interaction.

"The idea of a commons is a place of unpredictable interaction," Steven Holl Architects founder Steven Holl told Dezeen. "And that's why the building is so fluid."

"You can enter our building from either the north or the south so it doesn't have one front door. It's like a passage," Holl continued.

Rubenstein Commons has three levels – spread unevenly – so that different parts of the building have one-, two- and three storeys, with the total floor space totalling 17,175 square feet  (1,596 metres).

With a roughly L-shaped footprint, the structure's envelope was constructed with precast concrete panels.

At certain positions within the design, the concrete wall panels were clad with black slate to form functional blackboards for interior use.

Holl – who was in dialogue with many researchers at the institute when developing the design – said that the blackboards were an important inclusion for many of the scholars involved with the institute.

"I think it's a reassessment of what physical experience is," he said. "And that's also what this building is about, by the way."

Many of the buildings on the campus have copper roofing, and that element was retained for Rubenstein Commons. The roof panels extend over the precast-concrete walls with a variety of shapes and inclines, punctuated by three sections of green roofing. 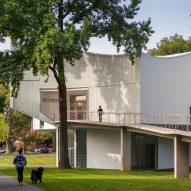 The asymmetric shapes and elevations of the roofing allow for the interior spaces to feel lofty. The ceilings and the walls of the structure have been curved in a way that represents the "thought bubbles" of the scholars who will work there, according to Holl.

The architect described the ceilings as "bulbous space curves."

The curving forms also take advantage of the large prismatic glass windows, which frame the exterior landscape, optimised via a selection of greenery to represent the different times of the year, adding to the fluidity of the structure.

"The institute is about the intertwining of all the arts and sciences and also the phenomena of nature," said Holl.

Inside, wood and terrazzo flooring were used for a series of double-height cafe areas, galleries and meeting rooms, which are punctuated by smaller office and administrative spaces.

In the double-height spaces, cut-outs in the roof and walls open up the structure internally, bringing in light and creating apertures from the hallways on the upper levels.

According to Holl, these material concerns were of the utmost importance to the execution of the project.

"I always say that there can be ideas that drive the design, but the important thing is the experience," he told Dezeen.

"You need to feel the experience in the space, but if you care to look for them, there are deeper ideas that drive the designs, and I do that with all my work."

The building is heated by 20 geothermal wells on the site which regulate the temperature of the structure, while operable windows help keep it cool.

Other buildings on academic campuses in the US include Diller Scofidio + Renfro's layered structure for Columbia in Manhattan and SOM's renovation of a building for Wellesley,

The photography is by Paul Warchol.