The project expands MoMA's layout by one-third and includes the creation of new galleries in addition to redesigning existing spaces, such as its lobby and bookstore.

MoMA closed in June to begin the final phase of work, following the completion of the first phase on the museum's east side in 2017. The New York museum will open to the public on 21 October, marking the end of the major project.

Led by New York architecture firm Diller Scofidio + Renfro (DSR) and Gensler completed the renovation to reference aspects of the storied past of the MoMA complex, which has received a number of transformations since it was established in 1929.

The museum moved to a glazed tower in 1939, which was built by Goodwin-Stone and remains visible to this day from its 53rd Street entrance.

Architect Philip Johnson then completed an extension in 1964, which included the sculpture garden, and 20 years later César Pelli designed addition in 1984. Another major expansion was designed by the Japanese architect Yoshio Taniguchi and completed in 2004.

Across the extension are frameless, clear glass panels, chosen to complement MoMA's existing architecture as well as maximize visibility from the street inside the museum. The panels are clamped and function as structural beams. Other glazed moments are coated in black dot frit to alter sunlight inside.

"The design integrates the various facets of the museum's architectural history, creating a distinct clear-glass facade on 53rd Street that complements the existing Goodwin and Stone, Johnson, and Taniguchi buildings and invites a more open dialogue between interior and exterior spaces," said architect Elizabeth Diller, founding partner of DSR.

A key element of this final phase is the extension to the west wing of the museum's Ronald S and Jo Carole Lauder Building, on the plot where the American Folk Art Museum stood before it was razed for the MoMA project. 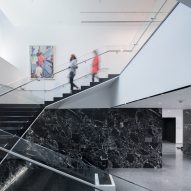 "You sort of had to back up through galleries," he added. "Here you can get to all of the galleries with a big loop."

Thus, MoMA's three main gallery floors on floors two, four and five have been enlarged, in keeping with original and varying ceiling heights.

Inside, structural addition acts as a new circulation network for the museum. Corridors covered in blackened steel panels are designed as "portals" to signify the changing of zones, acting as corridors between the new and old galleries.

The addition is designed as an "anchor point, a palette cleanser, and a place to realign yourself with the city", according to Renfro. "It's quite calming."

In keeping with this, the firm chose simple materials. A staircase is clad in maple panels, which are bleached stained and micro-perforated, while the floors are covered in wide oak planks. A central wall within the stairwell features mirror polished, bead-blasted stainless steel.

The staircase is arranged around this structural spine, which hangs from the ceiling to support the stairs and landings that are free of any lateral supports.

"We wanted to bring a material palette that introduced warmth," Renfro continued. "We wanted to make the spaces more intimate."

Going through these floors, the museum is cacophonous," he added. "It's huge. You didn't know where you were."

The new signage and wayfinding at MoMA were designed by Wkshps in collaboration with Gensler.

The museum's cafe is relocated to the sixth floor, complete with an outdoor patio overlooking 53rd Street and a nearby plaza. The cafe is characterised by black grand antique marble designed by DSR.

MoMA's flagship bookstore has also been moved from street level position to underground, as apart of the project. "This is a big, daring move," Renfro said.

The store's placement creates a sightline from the sidewalk outside, deep into MoMA's lobby and core. A new lounge area with black seating is located in between the store and blackened steel ticketing desk, which used to be at the core of the museum and has been redesigned.

"We cut a hole and let everything be visible from up above," said Renfro. "I think it is going to be so much better than what it was on street level because you can see everything and see exactly where you want to go from up top."

Rounding out the ground floor is a new coat check, membership area, and an expanded entrance on 53rd Street with a raised ceiling. Lobby floors are covered in new green Vermont slate – the same stone that featured in the lobby and atrium from Taniguchi's work.

The opening up of the MoMA's ground floor creates a more spacious core that better accommodates the movement of patrons between the dual entrances on 53rd and 54th streets. It also provides easier access stairwells, elevators, and the outdoor sculpture garden created by Johnson.

Other new spaces for the museum are a gallery on the ground floor, which is open to the public without the need to purchase a museum ticket, a Creativity Lab clad in Douglas fir plywood, and a black room called the Studio that has acoustically isolated walls and floors for sound and performance installations.

The Studio also features metal mesh placed within its street-facing glass facade, which controls sound and light that enters and leaves the space.

A gallery on top of the lobby of Nouvel's tower is "extremely loadbearing" with massive steel columns, and one room on the level are eight steel blocks by Richard Sera.

Outside, MoMA's entrance at 53rd Street features a stainless steel plate canopy that is bead blasted.

In addition to MoMA, DSR is behind another museum building in New York City, The Shed at Hudson Yards, and where the studio has also designed a residential tower. Founded in 1981 and based in the city, the studio is led by four partners, Elizabeth Diller, Ricardo Scofidio, Charles Renfro and Benjamin Gilmartin.

Photography is by Iwan Baan courtesy of Diller Scofidio + Renfro unless stated otherwise.