Artist Shezad Dawood has created an architectural playground in Doha that features miniature versions of four well-known buildings in the city.

Dawood worked closely with local architect and architectural historian Fatma Al Sahlawi to choose the buildings for Doha Modern Playground – the Sheraton Hotel by William Pereira, the National Theatre and Ministry of Information by Triad CICO, Qatar University by Kamal El Kafrawi and the Qatar Post Office by Twist & Whitley.

Built between 1982 and 1987, Dawood defines the four buildings as "a key group of modernist buildings that really represented the shift to an independent nation".

"Each of the buildings I referenced had its own quirks and particularities of design that naturally lent themselves to interpretation, such as the iconic pigeon hutches of the Qatar Post Office, or transforming the colonnades of the National Theatre and Ministry of Information into tunnels for children to crawl through," Dawood told Dezeen.

He also made some changes to their designs to make the buildings suitable for a playground.

"The striking mashrabiyas of Qatar University became lamps that lit up at night, with an outer curving climbing wall," he added.

"And last but not least, William Pereira's Sheraton Hotel is a science-fiction masterpiece that first inspired my interest in the modern architectural legacy of Doha."

Located in Doha's Al Masrah Park, Doha Modern Playground features two benches as well as the four play objects, which were made from stainless-steel subframes and glass-reinforced concrete (GRC).

"I wanted them to be materially as close as possible to the methodology and surface textures of the original buildings they reference, and to weather in the same way, given their location on the Corniche, where sunlight, sea and sand are all factors the built environment has to contend with," Dawood explained.

The artist spent a lot of time with his own children in playgrounds to observe how kids interact with space before creating his designs.

In addition, Dawood tried to think about the relationship of scale between adults and their built environment, as well as children and environments especially built for them.

"One of the key concepts I wanted to put forward was proportionality, and so I designed the playground to be oversize, which meant it had the same scale for the children who would come to use it as that of the adults in relation to the original buildings that the playground references," he said.

The artist's aim was for Doha Modern Playground to function as a "miniature city".

"I wanted kids to be able to imagine the playground as a miniature city designed especially for them – and this extended to the benches, the topography and the choice of colours for the rubber matting, which I used to echo the layers of sand, sea, and greenery that already frame the environment in Doha," Dawood added. 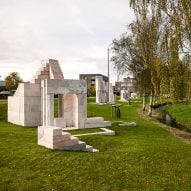 Each of the buildings was reimagined to feature "key play functions" associated with playgrounds, such as slides, swings and tunnels, and Dawood also wanted the designs to be spaces where children could let their imaginations run free.

Some of the playground's miniature buildings can be directy compared to their real-life counterparts.

"There are also direct sightlines from three of the play objects to the original buildings they reference, specifically the National Theatre and the Qatar Post Office, which lie immediately to the north and south of the playground itself, as well as the Sheraton – a short distance away to the north-east along the Corniche," Dawood said.

"So for example, children playing on the summit of the Post Office play object can't help but notice the larger parallel architecture of the real post office, mirroring them."

Qatar has unveiled a number of cultural projects as the country prepares for the FIFA 2022 World Cup Qatar, which begins this week. Architects including OMA and Jean Nouvel are among the architects to have designed museums in the country, while studios, including Zaha Hadid and Foster + Partners, have designed the stadiums in which the games will be played.

The country has been criticised for its human rights record in the run up to the tournament. A recent report from Labour Amnesty International said that abuses are still happening "on a significant scale" in Qatar, while the organisation's Peter Frankental said that the architects of the stadiums should speak out on human rights issues or risk helping Qatar in its "sportswashing attempts".

The photography is by Sarjoun Faour, courtesy of Qatar Museums.