Herzog & de Meuron's proposal also includes improvements to the station and railway infrastructure, such as the addition of 60 per cent more ticket barriers, 1.5 acres of public and green space, and increased circulation, platform and concourse areas.

A large upper concourse will be added, extending the current mezzanine level that surrounds the main concourse, bringing its total concourse area to 9,137 square metres. The addition of six escalators will lead visitors to the existing platform-level concourse.

Alongside improvements to the station, two towers will be introduced alongside it to house approximately 78,038 square metres of office space and a 17,651-square-metre hotel.

Visuals of the plans suggest that part of the station's glass and iron roof will be replaced with a curving white canopy, which extends to the southwestern corner of the site to make way for the double-level concourse.

Above the canopy, renders show one of the two towers in place of one of its existing 1980s entrances, which Architects' Journal reported could be demolished to make way for the project.

The historic components and facade of the Grade II-listed Andaz hotel, which sits beside the station, will be restored. The hotel will also be fitted with routes to the station concourse, creating new public spaces and allowing the public to access its historic rooms, ballroom and masonic temple.

Renders of the second taller tower, which will be used to house the hotel space, show it emerging from behind and above the existing 19th century-hotel facade.

After initial plans for the project were released earlier in October, Historic England voiced its concerns surrounding the proposal, saying that the plans to redevelop the railway terminus would have a "severe impact" on the Bishopsgate Conservation Area.

"The proposed redevelopment of the station would have a severe impact on the Bishopsgate Conservation Area, and more widely on the extraordinary historic character of the City of London," said Historic England.

The public body added that the scheme would "trample on the listed station and hotel rather than showcase their heritage".

"The 16-storey tower and bulk of development proposed above the station is so large that it is likely to encroach on views of some of London's great landmarks, including those of St Paul's Cathedral protected under the London Views Management Framework," it continued. 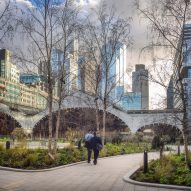 "Liverpool Street Station is one of London's great Victorian stations, with a distinctive and special character," Wilson said.

"While we recognise the need for upgrades to the site so that it can better serve the millions of people that pass through its doors, this oversized and insensitive development is surely not the answer."

In a press release released by developer Sellar and transport operators Network Rail and MTR, it explained that views of St Paul's Cathedral will be protected, ensuring "no or low impact on views" of the historic structure.

"We have also prioritised protecting and enhancing the heritage elements of both the Andaz Hotel and of the station itself," added Sellar chief executive James Sellar.

"The original Victorian railway sheds at Liverpool Street station will not be touched but will be celebrated by opening up new views to them."

The renders are courtesy of Herzog & de Meuron.