Dezeen has been named Business Publication of the Year at the Professional Publishers Association's annual awards for independent publishers.

Professional Publishers Association (PPA) judges praised Dezeen for creating content aligned with the needs and interests of its readership that was presented in an aesthetically appealing way.

"An excellent entry from a beautiful publication"

"The winner was loved by our judges and they said it was an excellent entry from a beautiful publication, which completely understands its audience," said the PPA.

Dezeen's entry included its reporting on the most impactful global events affecting architects and designers, including the war in Ukraine, along with its series on deconstructivism and the 9/11 anniversary. 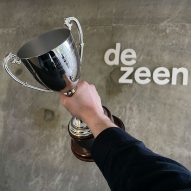 Dezeen's co-CEOs Benedict Hobson and Wai Shin Li collected the award on behalf of the Dezeen team at the PPA Independent Publishers Awards 2021 ceremony in London on Friday.

It follows Dezeen being named media brand of the year at the annual awards for independent publishers last year.

This year's win comes a week after Dezeen was named editorial brand of the year by the International Building Press. The organisation presented the award for our "compelling content" and "hugely impressive" audience engagement.

The awards were among nine nominations that Dezeen received for publishing awards that were presented in November. Dezeen editor Tom Ravenscroft is shortlisted for Editor of the Year in two categories at the annual awards ceremony organised by the British Society of Magazine Editors (BSME), which will be presented this week.