Taillandier Architectes Associés (TAA) was asked to modernise a traditional property in Toulouse's Minimes neighbourhood to meet the needs of a family of four.

House M sits on a long and narrow plot, where a small building known locally as a chartreuse stood at the end of the garden.

The chartreuse was retained and extended to create additional living spaces and a main bedroom suite, along with a new garden annexe housing a guesthouse and pool house.

The concrete extension is positioned on the southern side of the chartreuse to preserve a view of the original facade from the entrance at the opposite end of the plot.

The new wing sits slightly lower than the existing house and features a stepped, flat roof that abuts the gable end.

"The choice of a terraced roof for the extension allows the new volume to slide in underneath the overhang of the existing tiled roof," said the architects.

The studio added that its modern aesthetic enables the extension to "clearly differentiate itself from the traditional form of the existing structure, typical of the Toulouse area. It is a 21st-century reinterpretation of the chartreuse."

The extension's roof features an overhang that enhances the structure's horizontality and the impression of it hovering above a glazed box.

The glass walls optimise the visual connection between the rooms and the garden, while the combination of a lateral load-bearing concrete wall with metal pillars ensures the interior and facades remain unobstructed.

The architects claimed that there is a "clear and acknowledged" reference to the work of modernist architect Ludwig Mies van der Rohe in the extension's form and materiality.

The existing chartreuse now forms a wing housing the children's bedrooms and a kitchen in the central section, where the ceiling was removed to add height to the room. 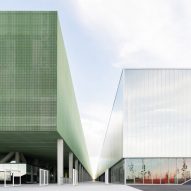 Throughout the new and existing parts of the house, service spaces including walk-in wardrobes and bathrooms are designed like furniture elements to create a more cohesive feel.

A new structure containing the guest suite and pool house at the front of the site was designed to match the height of neighbouring buildings.

The design of the annexe echoes the extension's aesthetic, with its raw, prefabricated concrete walls enclosing large glazed openings looking onto the garden.

A path alongside the pool extends from the front gate to an entrance located between the old and new parts of the house.

"On the plot, each element of the project, including the main extension, the pool and the outhouse, is positioned in sliding alignment with the initial chartreuse building," TAA pointed out.

"The main entrance of the house is thus naturally positioned in the dual-aspect glass volume linking the existing house and the main extension."

Spaces at the rear of the site, including the main bedroom's en-suite bathroom and the children's playroom, look out onto a smaller garden and an outdoor dining area.

Architect Pierre-Louis Taillandier founded his eponymous studio in 1993. Previous projects by the studio include a car park extension and renovation that was longlisted for Dezeen Awards 2020 and an exhibition centre developed together with OMA and PPA Architectures.