Gales, a creative director behind the BBC's BAFTA-winning trailer for the Tokyo 2020 Olympics (above), was one of two pedestrians hit by a suspected drink driver in downtown Los Angeles.

The driver was driving the wrong way down a one-way street at speed, according to the LA Times. He attempted to drive away after the incident, but was arrested by LAPD after then crashing into another vehicle.

In a post on social media, Factory Fifteen co-founders Paul Nicholls and Kibwe Tavares said: "We genuinely feel that we have lost a part of who we are."

"We loved working with Jono, who approached both his job and his hobbies with unbounded curiosity, enjoying the research, the process and the mastery as much as the completed project," they said.

"Working proactively and without ego, he provided a steadfast creative partner to us both." 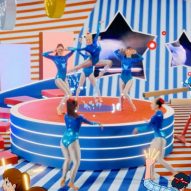 The trio formed Factory Fifteen after studying together at The Bartlett School of Architecture, where they earned attention for their ground-breaking films exploring the future of architecture and technology.

Gales' graduation project, published on Dezeen in 2012, created a striking vision of a dystopian future London.

Architecture remained a central focus in the visuals and animations produced by Factory Fifteen, which included commissions from Formula 1, Samsung, Film 4 and The British Film Institute.

Key projects include Chupan Chupai, which debuted at the 2013 Lisbon Architecture Triennale and centred around a digital city, and ANA, a science-fiction film set in a car factory run by drones. The trio directed the BBC's Tokyo 2020 promo video, Let's Go There, which was awarded the BAFTA for titles and graphic identity earlier this year.

"It's difficult to express the synergy between the three of us," said Nicholls and Tavares.

"Our collaboration was absolutely intuitive and one of total trust from day one. With very little communication or direction we could independently take one another's ideas and see them through."

London-based architect Arthur Mamou-Mani, a former colleague of Gales, is among those who have shared tributes.

"I remember his smile, his intelligence; he impressed everyone so quickly," said Mamou-Mani.

Anna Higgs, a director at Meta and chair of the BAFTA film committee, said: "Jono did so much incredible work [...] but at this stage leaving a legacy is no consolation."

Gales leaves behind his wife Claire Pepper, who is expecting their second child, and his 23 month-old son Finley Pepper Gales.