Design Academy Eindhoven graduate Lina Chi has created a collection of curvaceous furniture pieces made from single sheets of linoleum to help reinvent the material.

Named Linoleum, the collection includes a bench, a low table and two stools that were designed to show how linoleum, which is typically used as flooring, can also be used to create furniture.

Linoleum is a biodegradable material made from a combination of biomaterials including wood flour, tree resin and limestone, which are mixed with linseed oil and applied to a jute fabric backing.

According to Chi, the biomaterial is often misconstrued as being made from plastic, likely because of PVC surfaces that have a similar appearance.

Her Linoleum furniture collection aims to maintain a sense of material familiarity while demonstrating how linoleum can be reinterpreted in different ways.

"It's a rebranding because it's an existing material and I wanted to show it in a new light, but to me, it's also a heritage, something we had in the 1970s," Chi told Dezeen. "If we use it again today in 2022, what does that look like?"

"It's been around me forever – in schools, hospitals, kitchens – and those were such strong memories because of its visual qualities and also because of the smell and touch," the designer continued.

"It's so specific of a period of time that for me it was a perfect material to bring contemporary questions to a material that was already there." 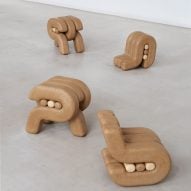 Chi collaborated with Swiss flooring manufacturer Forbo to test how samples of linoleum could be bent and curved by hand into sculptural shapes.

As an internal surfacing material, linoleum is water- and fire-resistant. According to the designer, the main challenge in using the material for furniture was making it strong enough to hold a person's body weight.

To make it stronger, Chi took inspiration from how cardboard was made stronger by adding a corrugated layer between two sheets of paper.

The Linoleum furniture was made without the need for adhesives or permanent bindings. Chi warped a single sheet of linoleum by hand in a heated room, creating a corrugated structural shape with sculptural curved flourishes that harden in place when cooled.

"I realised that the tighter I was making the undulation of the linoleum, the stronger it was getting, and what is interesting is the linoleum changed with the heat of my body, but also the heat of the room," the designer said.

Chi hopes that the furniture collection will prompt others to experiment with existing materials in unconventional ways, and for linoleum to be used in conjunction with other materials that complement its properties.

"I would love if it once again shaped our domestic space, but in combination with new materials," the designer said.

Other designers have also developed furniture made from biomaterials in an attempt to provide more sustainable options, including children's stools made from waste olive pits and restaurant furniture produced from food waste.

The photography is by Sarah Collins and Ronald Smits.