Laila Gohar, known for her surreal food sculptures, has moved into homeware design and is working with global artisans to help preserve "dying and disappearing" crafts, she tells Dezeen in this interview.

Gohar, who runs the Instagram account Lailacooks, was born in Egypt and studied in the US. The designer is best known for her creative food installations and projects that blend design, food and art, which she produces at her studio in New York.

Among Gohar's recent pieces are a swan sculpture made from artichoke leaves and towers of potatoes and eggs cast in resin, the latter of which were made together with artist Robert Anthony O'Halloran and shown as part of the Alcova design platform at Milan design week.

"Every project I do is different," Gohar told Dezeen. "That's really one of the biggest pleasures of my job – I can do different things all the time."

Though she never studied to become a chef, Gohar has always had an interest in food and previously worked in restaurants.

"At some point, I knew that [the restaurant industry] wasn't the place for me but at the same time, I wasn't going to design school to learn how to make a chair," she said.

"So it was this kind of in-between [career], and it took some twists and turns and figuring things out along the way – sort of making a path that didn't exist before. It's a kind of a job that doesn't really exist," Gohar says of her work.

"With my work, I imagine it a bit like a planet or universe that I've created for myself."

As well as continuing to create her sculptures and installations and making products and food for fashion brands such as Gucci, Gohar recently branched out into designing her own products.

Together with her sister, Nadia, Gohar launched Gohar World, a brand of tableware that is designed in New York but made by global artisans in countries including Vietnam, Egypt and Austria.

The brand, which sells everything from lacey "bottle aprons" to chicken-feet necklaces made from freshwater pearls and salami-shaped candles, aims to help address the issue of crafts-making knowledge disappearing from the world.

"I've been thinking a lot about specifically Egypt, but it's kind of an issue everywhere in the world that craft is dying, it's disappearing," Gohar said.

"People that have done certain things in a certain way for so long are abandoning those things because they themselves undervalue them and there aren't economies that can sustain them," she added.

"I think it's really tragic that in our lifetime so many of these things are going away."

Her projects include a swan made from artichoke leaves

Part of her aim for Gohar World was to create a platform that would enable global craftspeople to reach a wider audience to support their work and its heritage.

"I want to build it in a way that is not just a nice little side-project, I want it to really be this ecosystem that can support these things, and therefore these people can pass on this knowledge so it doesn't die with that generation," she said.

The designer is this month launching House of Gohar, the "first shoppable installation" of Gohar World products, together with fashion brand Dries Van Noten at its Little House fashion store in Los Angeles.

Gohar also recently collaborated with Danish design brand Hay on Sobremesa, a collection of tableware and kitchen accessories that were designed to "celebrate the joy of hosting". Pieces include colourful pots, bowls and jars as well as bags, napkins and aprons.

The collaboration, which according to Gohar was "designed via Whatsapp" as it came about during the coronavirus pandemic, was unveiled at Danish design festival 3 Days of Design. 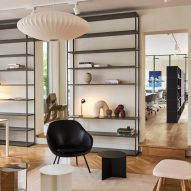 It was the result of Gohar and Hay designers Rolf and Mette Hay being admirers of each other's work.

"I felt like we spoke a common language, a language of colour that I really understand," Gohar said. "I'm really pleased with the collaboration, it's so nice to collaborate when there's the right synergy between people. Collaborating can be such a pain in the ass, or it can be so fulfilling and nice."

As well as working with Hay, this year also saw Gohar design The Pigeon Table together with design studio Muller van Severen, a galvanised-steel and polyethylene table with multiple attached shelves on which to display food.

As seen in both collaborations, her work is often colourful and has an emphasis on materiality, whether that takes the form of a hand-painted bean pot or a swan made of meringue.

She believes the growing interest in her pieces is the result of a change in the kind of aesthetics that people are currently appreciating.

"We're kind of coming off this sort of post-industrial kind of [aesthetic] – everything sleek, clean, minimal, with a little bit of colour thing," she said.

"I think people are going to want something a little bit different. Now there's going to be more maximalism and more kind of layering and more saturation."

Other food-related designs previously covered on Dezeen include 10 experimental designs that tackle food challenges of the Anthropocene era and a collection of kids' chairs made from olive pits.