They include 3D-printed headdresses and shoulder mantles designed by Carter and produced by architect Julia Koerner.

Part of Carter's aim for Wakanda Forever was to showcase the possibilities of afrofuturism, a movement that reimagines the Black experience into a fantastical or sci-fi future.

Black Panther garnered huge attention when it was released in 2018 for being the first Hollywood superhero movie to feature a Black protagonist.

"I think that the first film opened up the door," Carter told Dezeen. "We couldn't go as soft as we did in the first film," said the designer, who became the first African American to receive an Academy Award for Best Costume Design at the Oscars for her work on the first Black Panther film.

"Obviously, we did a really great costume design together in the first film, but in the second one, we asked, 'how can we elevate that? How can we push the boundaries?'"

Carter's work has been praised for introducing a mainstream audience to afrofuturist costume design, with designers from countries across Africa arguing that it put the continent in the spotlight as a growing force in design, technology and fashion.

The Marvel sequel Wakanda Forever, which is currently showing in UK cinemas, raked in $180 million (£152 million) in US ticket sales making it the second-biggest film of the year so far.

Set in a fictional futuristic nation called Wakanda, Wakanda Forever takes place in the aftermath of the death of Black Panther protagonist King T'Challa, played by the late Chadwick Boseman.

A major difference between the two films is that much of the second is set in the secret underwater nation of Talokan. Because so many scenes were shot underwater, the designers turned to new materials to create the costumes, including rubber and silicone.

"We went through the history of the Mesoamerican to create an alternate future on the water," Carter recalled.

"We relied on the Mayan inspirations, but also the environment that they were now in underwater, so things like coral and fish and bones became more important when creating the headdresses."

According to Carter, the idea was that the costumes would take on a central role, with the queen donning a striking ensemble to match her character development and powerful position.

"In the first film, Queen Ramonda was very casual, she wore yoga pants and she was seen a lot barefoot," said Carter.

"The second film was a much stronger presence for the Queen," Carter explained. "In her first scene – the intro scene – she needed to represent the power of Wakanda now in her seat on the throne, and that she's a ruler of this nation."

"Ruth and [Wakanda Forever director] Ryan Coogler were really keen on having something that had not been done, elevating the Queen's character with the regal attire, which looks technologically advanced and very digital," added architect Koerner. 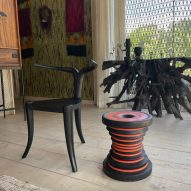 Key pieces worn by the queen character in the 2018 Black Panther movie, such as a crown and colossal shoulder mantle, have been re-imagined for Wakanda Forever with added complexity and a broader range of colours and materials.

"The complexity of the geometry of the piece that goes in front of the crown, the intricacy of the filigree design is is more intense and is elevated," Koerner told Dezeen.

The Isicholo – a traditional handwoven South African headpiece worn by married women – also makes a reappearance. Carter designed the patterns for the item by drawing on designs found in African lace.

"It's normally like a basket-weave hand-woven shape and as she is the queen, it needs to be perfectly cylindrical," Carter said.

"I really felt like since we were creating Wakanda, and it's a forward-thinking nation, it's a country that's living in technology, that there was no way we could not have 3D design in this process of costumes," she added.

To create the 3D-printed items, Koerner uses computational design tools to approach the discipline of fashion with architectural techniques learned in her training at the University of Applied Arts in Vienna and the Architectural Association in London.

After initial meetings with Carter and seeing the costume sketches, Koerner would start shaping out the base geometry of the crown and neck piece and then begin writing an algorithm or code in a technique known as generative design.

Working virtually across continents from Koerner's base in Vienna and Carter's in Atlanta, this process was preferable as it meant that Koerner could easily change designs based on Carter's feedback.

"If at one point we have a meeting and the team desired to change the circumference of the crown, or the thickness or to change the height of it, we do not need to remodel everything, but we simply change a number in the code and the whole pattern automatically generatively adapts to it," Koerner explained.

"It is a very progressive way of working because even if you have a change in size and dimensioning, at the last point, you can easily adapt the geometry in 3D and in a much more resourceful way."

"And it's also a sustainable process because you don't make any moulds, you really just use the material which goes into the piece."

Certain patterns were also repeated in different accessories across the two films.

"Let's say in the first film, you saw the crown had this kind of pattern on the rim, that was repeated in the rim of the shoulder mantle so you have elements which are connected," said Koerner.

"With 3D printing, you can mimic these natural patterns perfectly and with the computer, you can generate these perfect symmetrical shapes."

However, Carter decidedly refused to use Ankara fabric – a wax-printed material that is commonly used for colourful clothing in countries across West and Central Africa – because of its link to colonialism.

"Ankara fabric epitomises colonisation as it was brought from the Dutch, it's still even produced by the Dutch, she explained.

"You will notice that there's not a lot of that in Wakanda, I tried to stay away from it because I know its origin and how it's manufactured," Carter continued. "It's difficult for me to put it into this context."

As well as working with Koerner, the film also saw Carter call on designers around the world including Dutch haute couture designer Iris van Herpen, who created a hand-strung jade necklace for Shuri, the superhero played by Letitia Wright who eventually takes on the Black Panther suit.

For Carter, such collaborations reflect the film's connection to afrofuturism, which advocates people from all over the African diaspora uniting across geographies.

"We are our future and we are actually living afrofuture and making a film about it seems very organic to our process," she said.

"I have companies that I deal with in India, Africa and London, and designers that I work with like Iris and JJ Valaya and we're all contributing to this film, and I feel like that was very much a whole picture for costume design."