Julia Koerner explains how she uses technology to apply architectural techniques to fashion and costume design in the first video of our Design for Life collaboration with Dassault Systèmes.

Koerner is the first designer to feature in a series of six videos as part of Design for Life, a new content collaboration between Dezeen and Dassault Systèmes that highlights designers who are using technology and research to build a better world.

The Austrian designer, who is based between Los Angeles, USA and Salzburg in her home country, uses generative design tools and 3D-printing technology to work across a field of disciplines including architecture, fashion and product design.

She is the founder of her own practice, JK Design, and holds a teaching role at UCLA's Architecture and Urban Design department. 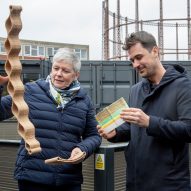 3D-printing enabled Koerner to realise the detailed filigree structures of Queen Ramonda's crown and shoulder mantle, designed to convey the technological advancement of the fictional nation of Wakanda while referencing patterns in traditional Zulu clothing.

"3D-printing designs in the costume world is such a great opportunity because there are no limitations on the form and geometries," Koerner said in the video, which was filmed by Dezeen at the designer's studio in Los Angeles.

The designer, who has created 3D-printed haute couture for Iris Van Herpen and Chanel, uses computational design tools to approach the discipline of fashion with architectural techniques learned in her training at the University of Applied Arts in Vienna and the Architectural Association in London.

"When I'm inspired by a natural artefact I look at its structure," she says. "I think about whether this could become a prototype for a facade, or could it become an algorithm which can be adapted for a garment?"

Koerner's Setae jacket, created for Stratasys, features an intricate network of multicoloured 3D-printed bristles that mimic the hairlike setae structures found on the wing of the Madagascan Sunset Butterfly.

"I digitised microscopic photographs of the butterfly wings, and developed an algorithm which can read those images and translate the colours into the geometries which were then 3D-printed directly onto the fabric," explained Koerner.

Koerner's Arid collection, unveiled earlier this year, is a set of 38 3D-printed parts that can be combined to form a full-dress. The parts can also be reconfigured in numerous ways to form other kinds of garment.

Each of the 38 pieces feature 3D-printed joints instead of seams, allowing the wearer to detach and connect elements in a variety of configurations.

The piece was designed by Koerner as part of Re-FREAM, a research project that pairs designers with scientists to reimagine the manufacturing processes of the fashion industry.

"This project is particularly unique because it doesn't involve any sewing," explained Koerner. "It only involves 3D-printed joinery directly on the fabric. It's the first time that fabrics are attached in this way."

According to Koerner, computational design tools allow designers to more accurately emulate patterns and processes found in the natural world.

"The computational and generative techniques of parametric design enables us to mimic colour rhythm and proportion as we see it in nature," she explained. "My work is between the beauty of organic and synthetic processes and it enables me to envision the kind of synergy between the two."

In the coming weeks we will be broadcasting a live workshop with Mamou-Mani, as well as publishing a series of videos profiling the work of cutting-edge architects and designers including, Exploration Architecture founder Michael Pawlyn, DS Automobiles design director Thierry Metroz and Studio INI founder Nassia Inglessis.

Black Panther images are by Matt Kenneda/Marvel Studios 2018. Arid and Setae photos are by Ger Ger. Portrait is by Florian Voggeneder.