Australian studio Koichi Takada Architects drew on Qatar's pearl-diving history when creating the interior of Jiwan, a restaurant in the Jean Nouvel-designed National Museum of Qatar.

The interior of Jiwan was informed by Qatar's history of pearl diving and by the architecture of the museum, which Atelier Jean Nouvel designed as a series of colliding disks.

"The palette of materials that we drew from was very much about paying homage to the unique Qatari landscape – where the desert meets the sea – as well as the iconic architecture," studio founder Koichi Takada told Dezeen.

"We chose a mirrored finish for the ceiling to draw the reflection of the Persian Gulf deep into the space, as well as to reflect the gentle movement of the four million Swarovski crystals that dance from the ceiling," he added.

"The curvature of the crystal paths on the ceiling and the organic-shaped leather dining booths respond to the curvilinear architecture, with a luxury silk carpet underfoot."

Jiwan, which seats 130 guests inside and another 130 on its terrace, has pale pink walls that were designed to curve like the shell of an oyster, providing another nod to the pearl-diving theme.

The interior also features a carpet with both orange and blue tones, which were informed by the sand and sea surrounding the museum. 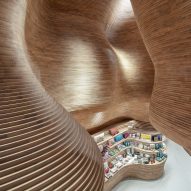 "The interior colour palette was in keeping with the pale desert-rose hues of the architecture and Qatar's expansive desert landscape," Takada explained.

"We designed a silk carpet to integrate the impressive colours of the Persian Gulf – transitioning from deep aquamarine through turquoise to a lighter desert-sand colour inspired by the Qatari inland sea Khor Al Adaid. At its edges, the flooring blends almost seamlessly into the architecture."

For Jiwan's terrace, which overlooks the "desert rose" shape of Nouvel's building, the studio created circular dining pods. Set within curved cream walls, these have burgundy booths and bronzed tables.

"We designed the space to sit carefully within and yet not touch the architecture," Takada said. "In effect, the interiors are designed so that if one day they are removed, the architecture will remain untouched."

The museum is among a number of cultural projects and architectural landmarks that have been completed in time for the 2022 FIFA World Cup, which is currently taking place in Qatar.

The country was heavily criticised for its treatment of migrant workers in the lead-up to the World Cup, which saw the country build numerous new stadiums to house the games.

The photography is by Julien Lanoo unless otherwise stated.