Koichi Takada Architects has proposed the mixed-use Sky Trees development for 1111 South Hill Street in Downtown LA. It comprises two towers – one planned to reach 70 storeys and the other about half as tall.

Both are covered in thin timber strips that lift upwards at the base. The shape is intended to resemble Monroe's dress as it blows up in the iconic film moment, from Billy Wilde's The Seven Year Itch in 1955.

The studio also referenced redwoods, which are one of the oldest and tallest trees in the world and native to California, for the design.

The upturned bottom of the development mimics the bottom of a trunk, as its roots spread out. Giant redwoods have slender trunks, reddish-brown exteriors, and scale to enormous heights, just like the tower.

A number of natural features are intended to be incorporated into the design. Images show greenery growing up between the slatted timber exterior – a feature Koichi Takada Architects calls a "breathing wall".

"Our vision is to make the tower the healthiest place you can live in downtown LA," said Koichi Takada Architects.

"The expressive canopy incorporates a 'breathing green wall' that improves the air quality of the city and introduces a unique landscaping feature to the downtown streetscape."

Angled roofs topping the two structures are also depicted as filled with gardens and terraces.

If built, Sky Trees would span 564,000 square feet (52,397 square metres) in total, and inlcude 528 apartments along with the shops. Additional amenities in the proposal are a podium rooftop pool, health facilities and a community green space. 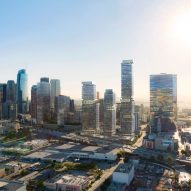 A host of new developments are underway in Los Angeles, adding to its growing skyline. Others include a rectangular trio designed by Skidmore Owings and Merrill and P-A-T-T-E-R-N-S, Frank Gehry's The Grand mixed-use development, and a hotel building with a rock-like facade conceived by ASAP.

Koichi Takada Architects hopes the upturned shape of Sky Trees' base will help separate it from others, and draw in passerbys.

"We want to humanise tall buildings, to celebrate the pedestrian activities and consider how people experience it," it said. "We want our tall building designs to be more engaging to the public to contribute to the community by activating and creating a connection with the neighbourhood."

Supertall buildings have recently come under scrutiny by leaders in the architecture community, with Elizabeth Diller of Diller Scofidio + Renfro arguing that they "damage the city fabric" when they are built like one-off projects, disconnected from their surroundings.