Art and design collective MSCHF has created an ATM that shows a leaderboard of users' current account balances, which was on display during Miami Art Week.

The piece – shown at the Perrotin gallery's booth at Art Basel in Miami – consisted of a standard functional ATM with a screen above that depicts the balance in the user's checking account.

In addition to the account information, the screen also displayed a picture taken of whoever was using the ATM, which was then stored and presented next to the account data.

"From its conception, we had mentally earmarked this work for a location like Miami Basel, a place where there is a dense concentration of people renting Lamborghinis and wearing Rolexes – and buying art, for that matter," he continued.

"These are analogous implicit gestures to the ATM Leaderboard's explicit one." 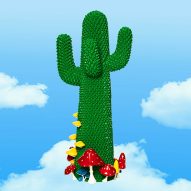 With the piece, MSCHF aimed to combine a desire to have fun with a statement critiquing the culture of the fair and the role of money in the world of art and design.

"ATM Leaderboard is such a pure distillation of the environment at Basel, and this was readily apparent to pretty much everyone who saw it," said Wiesner.

The projection of the balances and the photos on the screen made the piece interactive and the designers said that it was meant to become a performance, as crowds gathered to watch people insert their cards and became vocal about the results as people tried out the ATM.

When the results were given, various graphics similar to those seen in arcade games would appear on the screen.

"The higher you are on the ATM Leaderboard the more the piece is making fun of you," Weisner said, noting a sense of camaraderie among those lower on the leaderboard.

"Higher balances were cause for celebration, but only up to a point," he added.

"The top two places on the ATM leaderboard are currently occupied by the same couple, who came back with an extra $5 million to take a better selfie; they were greeted almost in silence."

According to Wiesner, the piece will keep permanent records of the data collected as it moves from place to place, noting that most ATMs have camera functions that most people are unaware of.

Based in Brooklyn, MSCHF is known for its parody artworks, including a sneaker filled with blood co-designed with American musician Lil Nas X that garnered a lawsuit from American sportswear brand Nike.

Last month, the collective showcased its first solo gallery show in New York, which featured a fridge full of a "functional" LSD analogue.