Called Hommemade, the design brand is the musician's first foray into homeware with the Shroom Cactus being the first piece to be released.

"This is the first collaboration from my Hommemade decor studio and since I've always advocated for mushrooms it was only right that we made a cactus with them [Gufram]," said A$AP Rocky.

For Design Miami – a yearly design showcase in Miami Beach, Florida – the musician produced a rendition of Italian design studio Gufram's Cactus, originally designed in by Guido Drocco and FrancoMello in 1972.

Shroom Cactus is a four-foot-tall green cactus that follows closely the original design, with a variety of hand-painted fungi affixed to the bottom. Nine pieces were created for the collaboration.

According to A$AP Rocky, both the "playfully innovative" and "luxury" aspects of Gufram's design sensibility made him choose to work with the brand. 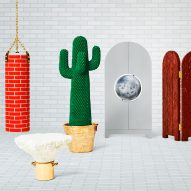 Representatives from Gufram told Dezeen that A$AP Rocky played an active role in the design of Shroom Cactus by travelling to Italy where he presented his vision for the collaboration.

At Design Miami, the Shroom Cactus was shown alongside a 3D-printed cactus bodysuit designed by Gufram in a booth with a sculpted artificial grass floor with walls printed with graphics.

"Under a blue sky with fluffy clouds and gigantic mushrooms illustrated on the walls, visitors are encouraged to walk on a grass-like carpeting which covers the ground where dozens of ceramic flowers are scattered," said the two brands in a release.

"I have constantly been looking for cross-contamination opportunities across various disciplines and feel like we reached an important goal in working with a phenomenal music artist like Rocky," added Gufram's global creative orchestrator Charley Vezza.

"I would say that developing this mushroom-based collaboration has been a good trip!"

No other details have been released relating to Hommemade. A$AP Rocky is set to speak on a panel at Design Miami on 30 November.