British designer Thomas Heatherwick's studio has opened its first office outside of the UK at 1000 Trees in Shanghai, a commercial building designed by the practice that opened late last year.

Its Shanghai studio will house a team of ten and be located on the fourth floor of the newly developed shopping centre, alongside the M50 art district and the Suzhou Creek.

It was designed as an open public space to encourage visitors to interact with Heatherwick Studio's work.

"Just like its home in 1000 Trees, which embodies the idea of making cities social places, the new studio is conceived as a public space where passers-by will be able to engage with the studio's designs," said Heatherwick Studio. It will be Heatherwick Studio's "first permanent overseas base," the practice said.

The studio space, which is located among the retail stores in 1000 Trees, features multiple stacked cubes at the entrance.

These are used to display models of the studio's most iconic designs in Asia, including the Bund Finance Centre in Shanghai designed in partnership with British architecture firm Foster + Partners and the Nanyang Learning Hub in Singapore.

The decision to open the new space in Shanghai was due to the studio's connection to the city.

"Ever since we built the UK Pavilion for the Shanghai 2010 World Expo, our studio has had an amazing connection to the region. It feels natural and exciting to properly set up a permanent base in one of our own buildings, with our doors wide open to the public," said studio founder Thomas Heatherwick. 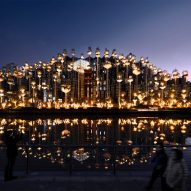 "I have huge respect for the design talent in China as well as people's appetite in this region to commission daring and exciting work. We can't wait to collaborate with everyone even more than we've had a chance to before," he added.

Heatherwick Studio will offer guided tours to visitors to explore its work at the new space.

The nine-storey 1000 Trees is a plant-covered shopping centre, designed to resemble a tree-covered mountain, converted from a former flour mill.

The structure of the retail development was built with a grid of concrete columns, each of which is topped with a planter that contains a mix of deciduous and evergreen trees, as well as shrubs and hanging plants.

Elsewhere in Asia, Heatherwick Studio is designing a volcano-like performing arts centre in Hainan, which will start construction soon. The studio is also creating Changi Airport's Terminal 5 together with Kohn Pedersen Fox in Singapore.