Architect Sean Griffiths has added a pebbledash-covered rooftop studio to the seminal postmodern Blue House he designed 20 years ago as part of architecture studio FAT.

The extension completes the house that Griffiths designed, along with Charles Holland and Sam Jacob, as one of FAT's first built projects in 2002.

"The project was very much a piece of unfinished business," Griffiths told Dezeen. "The house was originally conceived as a four-storey building with a roof terrace."

"A combination of limited budget and the planners' refusal, back in the day, to countenance a four-storey building meant it couldn't happen 20 years ago when the house was first built."

The shed-like rooftop extension forms part of a wider overhaul of the house that Griffiths originally designed for himself and his former partner, landscape architect Lynn Kinnear.

As part of the renovation, a separate flat and an office for Kinnear's studio that were incorporated in the original design to make the house financially viable were converted into additional bedrooms.

"I have a complex relationship to this house, as I lived there for many years and so inevitably it is bound up with memories of my early career and family life," said Griffiths, who no longer lives in the house.

"But it's also weird being an architect living in your own house because you live with your mistakes – of course, that is what you notice, rather than the good bits – so it was nice to come back and rectify some, if not all, of them!"

The timber-framed rooftop extension, which opens onto a pebble-filled roof terrace, contains a studio for Kinnear with views across the surrounding rooftops.

"I wasn't sure whether that was the right approach as we were doing it, but now I think it was."

Griffiths chose pebbledash, which was paired with a metallic roof and bright green and yellow details, as a nod to the material's unglamorous nature and holidays at Camber Sands on England's southern coast.

"The pebbledash was inspired by a number of different factors," he said. "One was that it is simply one of those materials that is not generally thought of glamorous, the stuff of suburban estates and not 'proper' architecture."

"It recalls holidays in Camber Sands where the family once had a hut that sat amongst the pebbledash bungalows that are typical of places like that," he continued.

"What is nice – and unexpected – is the way you seem to re-enter that world when you get to the roof. You lose all sense of being in the Blue House and it really is remarkably like being on a pebbly beach once you get up there."

As part of the home's overall renovation, Griffiths added two staircases – one up to the rooftop studio and an additional stair between the ground and first floor. He believes that this has not only improved circulation but changed the home's overall feel.

"The new extension and the circulation spaces create a set of new experiences and qualities which are quite different to how the house was," he said. "I think it is also true to say the detailing is more refined – the work of an architect with grey hair rather than a young gun."

Despite having a strong connection to the house, Griffiths believes that the extension and renovations have enhanced the original – much-lauded – design.

"It has always remained an important project for me," he said. "As well as living there, it has probably taken up a decade of my life in designing and redesigning it and overseeing all the construction work."

"Because of all that, it was one of those projects that received a lot of attention and thought, so that makes it, perhaps until the House of Essex, the closest thing to a gesamtkunstwerk in FAT's oevre," he continued.

"On the other hand, I'm not personally the most nostalgic of people and I think that allowed a certain critical distance."

One of the 1990s and early 2000s most influential architecture studios, FAT announced plans to disband in 2014, after 23 years of practice.

Along with the Blue House their notable projects included an apartment block that appears to have traditional houses on its roof and the fairytale-inspired House for Essex completed in collaboration with Grayson Perry. 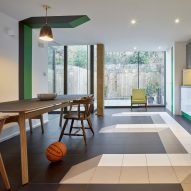 Following the end of FAT, Griffiths became professor at Westminster and now runs the studio Modern Architect, which previously created an extension that also incorporated pebbledash.

Revamping and extending the house he designed 20 years ago allowed Griffiths to reflect on his approach to architecture as a more mature architect.

"I'm not sure my views on architecture have shifted that much since the Blue House was conceived," he said. "I'm probably more open-minded which comes as a result of no longer trying to be the hot new thing!"

"I think you need that conviction to be able to have the sheer bloody-mindedness to realise something like the Blue House, so although it's absurd, it's kind of necessary."

"That's why we should always allow artists to believe in their bullshit. It might be bullshit but it can facilitate great things! Maturity hopefully brings a sense that you can act in looser way, perhaps because you're not trying so hard."