Architecture studio Neiheiser Argyros has overhauled a vacant 1970s villa on the Greek coast, which features a concrete roof with a pair of arches that frame views towards the sea.

The dwelling, named St Minas House, is located north of Athens near the village of St Minas, where it sits on a tree-lined site that overlooks the Euboic Sea.

Neiheiser Argyros was tasked with upgrading the existing structure on the site, which was designed by Greek architect Nikos Hadjimichalis in the 1970s and had been left uninhabited for the past 10 years.

The studio chose to retain parts of the original building, including many of its modernist features. Interventions such as new openings and extensions reorientate the spaces and help to optimise views.

"Whereas the original house was singularly focused towards the sea, by cutting large openings into the original structure and extending space outdoors in all directions, the diversity of the site – forest, grove, lawn, meadow and sea – is celebrated," Neiheiser Argyros explained.

St Minas House is hidden from the approach road by olive groves and a pine forest.

The site's sloping terrain partially conceals a row of bedrooms that are tucked into the existing landscape.

Perpendicular to the line of bedrooms is the home's main two-storey volume, which projects out towards the sea and opens up on all sides to connect with terraces that form outdoor living spaces.

The underside of the building's flat roof incorporates two shallow concrete arches that frame views of the sea from within the first-floor lounge and dining area.

These arches extend from the living spaces to shelter a large balcony spanning the upper storey. This shaded outdoor space is connected to the gardens below by an external spiral staircase. 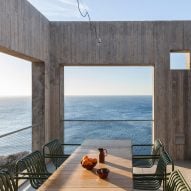 On the ground floor, another lounge area is lined with sliding doors that can be retracted to open the space up to the adjoining terrace.

Throughout St Minas House, the studio has introduced playful elements and materials that complement the existing modernist details, while choosing not to slavishly retain every aspect of the building's original character.

"The house is deliberately ambiguous in its treatment of old and new, and unprecious in its deference to the original house," said Neiheiser Argyros," at times revealing the traces of the manipulations and incisions to the original, at other times blending new with old, conflating past and present."

A limited material palette of exposed concrete and brick combined with wooden window frames and steel balustrades is used both inside and outside the house.

Neiheiser Argyros was founded in 2015 by Ryan Neiheiser and Xristina Argyros. Its previous projects include a sculptural pavilion designed to conceal the exhaust vents of a London Underground station, and a cafe with trellis-like walls that support a variety of pot plants.