The project, called Catching Sun House and designed for the practice's founder, is located on the site of a former ministry of transport (MOT) garage, the massing of which was adopted in the new home's design in order to secure planning permission.

Surrounded by terraced houses, the design was informed by the use of carefully placed openings to bring as much natural light into the home as possible, contrasting a heavy blockwork base with a lighter, timber plank-clad upper level.

"We wanted to create a contemporary, low maintenance, and low-energy home, maximising the potential of the hidden site," said Studioshaw founder Mark Shaw.

"The space planning was carefully considered, and 3D-modelling and testing of the design enabled us to ensure that the spaces feel generous and are always filled with light," he added.

On the ground floor, two bedrooms and a bathroom occupy the western end of the plan, with a large living, dining and kitchen space to the east.

The living area and main bedroom are topped by gently sloping sawtooth forms, creating two clerestory windows that pull light down into the space.

Pulling back the home from the edges of the site has created both a side return entrance route and three internal courtyard spaces, wrapped by a high blockwork wall for privacy from the surrounding buildings.

The large courtyard next to the dining area contains seating spaces, while two smaller courtyards alongside the bedrooms feature an outdoor bath and a glass-box shower, all of which are accessible via aluminium-framed sliding glass doors. 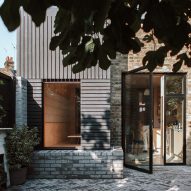 Black-painted larch planks clad extension to a house in London

"The exposed blockwork walls flow from inside to out, framing three external courtyards through sliding glazed screens, allowing the outside space to become and extension of the inside and the inside filled with light," Studioshaw said.

An orange ladder-style staircase leads up to the smaller first floor, where a wood-lined study and snug space with fitted floor cushions benefits from large windows providing views across the neighbouring gardens.

The blockwork of the lower level has been left exposed on the interior, contrasted by a high-level datum created by the pale timber-lined ceilings.

This industrial feel is continued in the fittings, which include an exposed extractor arm in the kitchen complemented by colourful Eames chairs and brushed nickel bathroom finishes.

As well as acting as both client and architect, Studioshaw took on the role of main contractor, splitting the work into 14 fixed-budget packages.

Previous projects by Shoreditch-based Studioshaw include the retrofit of a Grade II-listed building in Kensington to create a new, cocktail-bar inspired home for co-working space Kindred.