Emirati studio VSHD Design has completed a dark and dramatic interior for a restaurant in The Dubai Mall, featuring a pared-back palette of natural materials chosen to reflect Japanese minimalism.

Origami is a sushi restaurant, whose first outpost opened in Dubai's Jumeriah neighbourhood in 2014.

For its second branch, the owners asked VSHD Design to create a space that provides a unique experience within the cookie-cutter environment of a shopping mall.

The studio, led by interior architect Rania Hamed, used materials such as textured grey plaster, matte-black tiles and low lighting to create an atmosphere that evokes the underground sushi bars found throughout Japan.

The interior features monolithic columns and walls informed by the architecture of temples, along with seating covered with draped fabric and textured glass partitions that contribute to the feeling of "intrigue and mystery", the studio said.

The restaurant is entered through the gaps between a number of six-metre-thick columns, designed to enhance the sense of separation between the mall and the main dining room.

A small retail space on one side of the entrance hosts a concession selling chocolates while on the other side, a low bar area with wooden stools and a glass-block counter provides a waiting area for diners. 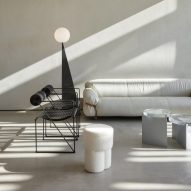 "The solid shop front facade made of rammed-earth clay and glass bricks evokes a feeling of intrigue meant to draw people inside," said VSHD Design.

The narrow entrance also limits the amount of natural light entering the dining room, which helps to maintain the dark and intimate feel.

The restaurant is arranged over two split levels that offer different seating arrangements, with the main area featuring built-in bench seating arranged around its perimeter.

Three steps lead up to a space housing the sushi bar, which is illuminated by an overhead light box and allows diners to watch the chefs at work.

Black tiles covering the walls, floors and counter create a dark and minimalist ambience throughout the interior.

The furnishings, including wooden chairs and benches upholstered with draped white fabric, provide a more relaxed and tactile element.

"Overall, it is the lines, the materials and the colours incorporated within the design that uphold a Japanese sensibility and spirit, while still appealing to a modern sense of luxury," the studio said.

Rania Hamed founded VSHD Design in 2007 and has since worked on residential and commercial projects in countries including Jordan, Egypt and the United Kingdom.

The studio's projects in Dubai include a gym that references brutalist architecture and underground fight clubs, as well as a coffee shop with a curved ceiling and boulder-like counters.

The photography is by Oculis Project.