English fashion designer and activist Vivienne Westwood, who was central to defining the aesthetic of the punk era, has passed away aged 81.

Westwood came to prominence as a key figure in the punk fashion scene in the 1970s and went on to be named British Fashion Designer of the Year in 1990, 1991 and 2006.

She passed away today, 29 December, said a statement published on her Twitter page.

"The world needs people like Vivienne to make a change for the better."

Along with her role as a designer, she was known for her activism drawing attention to climate change as well as nuclear disarmament and civil rights. 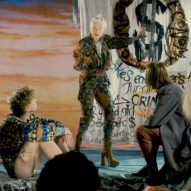 The "only way to save the world" is to ban land ownership, says Vivienne Westwood

Westwood was an ambassador for Greenpeace, designing the organisation's official Save the Arctic logo in 2013, and an active supporter of the charity Cool Earth.

In 2019 she sent models down the catwalk during London Fashion Week wearing aprons and tabards with anti-consumerist and climate change slogans and said in a talk that the "only way to save the world" is to ban land ownership.

Born in 1941, Westwood began designing in the early 1970s when she ran a boutique on King's Road known as SEX with then-partner Malcolm McLaren. During this time the pair contributed to the aesthetic of the early punk scene. 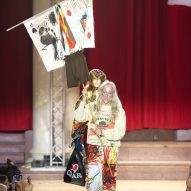 Westwood and McLaren would create numerous collections in the early 1980s before she launched her own line in 1984.

Her husband and creative partner, Andreas Kronthaler, said: "I will continue with Vivienne in my heart."

In 2004 the V&A held a retrospective exhibition for Westwood that was the largest ever devoted to a living British fashion designer. She received an OBE in 1992 and in 2006 she was made a Dame for services to fashion.

In 2019 she was awarded The Lifetime Achievement Medal at the London Design Medals.