Nelda Rodger, the co-founder and editorial director of architecture and design magazine Azure, has passed away after a long illness.

Rodger, who was born in 1952, founded the award-winning Azure magazine in 1985 together with her life partner Sergio Sgaramella and later also launched its annual AZ Awards. She died on 4 January aged 70.

"From the earliest, oversize editions, Azure has brimmed with a wit and a sense of expansiveness of mind and spirit that are pure Nelda," Azure said.

Rodger "pushed the definition of design"

Under Rodger's leadership, Azure won the Canadian National Magazine Awards Magazine of the year in 2000. Rodger and Sgaramella later transformed Azure Magazine into Azure Media, which publishes the print magazines Azure and Designlines.

As well as focusing on traditional design categories, Rodger was ahead of her time when it came to covering new areas of design.

"She pushed the definition of 'design,' spearheading issues about the creation of cities, the meaning of water, and the future of food, long before these realms were considered to be within its scope," Azure said.

Rodger had an eye for upcoming talent and interviewed then-emerging designers and architects such as Patricia Urquiola and David Adjaye, as well as iconic names including architect Gaetano Pesce and designer Ettore Sottsass.

In 2011, Rodger and Azure launched the AZ Awards, which showcase global architecture and design projects, under the Azure Media umbrella.

"Nelda was integral to the evolution of Designlines magazine and azuremagazine.com and to the inception and stewardship of the AZ Awards," Azure said.

"The first-of-its-kind awards program based in Canada – with its international focus and star-studded jury – the annual competition grew in size and stature under Nelda's leadership to adjudicate architecture and design of the highest calibre, attracting over a thousand entries a year from the best firms worldwide." 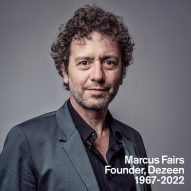 Remembering the design world greats we lost in 2022

Among those who remember Rodger are Karen T Kang, partnerships leader at TikTok, who first met Rodger in 2007 and worked with her between 2013 and 2020 when Kang was managing director and head of content at Interior Design Show.

"Nelda possessed a discerning eye that could spot true talent, often identifying designers and architects who would go on to become visionaries and leaders in their field," Kang told Dezeen.

"She had a gift for discovering and showcasing emerging talent, both locally and globally, by featuring them on the cover of Azure magazine, which helped to propel many careers forward."

"Her dedication and passion for the industry, coupled with her ability to support and encourage emerging designers, made her a true leader in the field."

Other recent losses in the design and architecture community include French architect Renée Gailhoustet who died in January at the age of 93 and Japanese architect Arata Isozaki who passed away aged 91 at the end of last year.

The photograph is courtesy of Azure.