Architectural studio Undecorated has designed an elongated, metal Quonset hut punctuated with dormer windows and filled with loft-style units for an evolving neighbourhood in Detroit.

The Caterpillar is located in Core City, an up-and-coming area that lies a few miles beyond the city's downtown zone.

Set within an "urban woodland" with over 150 newly planted trees, The Caterpillar was designed by Undecorated, a local studio led by Ishtiaq Rafiuddin, who worked with executive architect Studio Detroit.

Totalling 9,000 square feet (836 square metres), the building contains eight apartments, all housed within an elongated Quonset hut – a type of prefabricated, arched metal structure that became popular in the US during World War II. The huts are known for being inexpensive and quick to build.

The project is one of several ventures by Prince Concepts, a local real estate developer that is working with the city to develop about 100 vacant properties in the district.

The Caterpillar's enclosure is made of partly recycled steel and was manufactured by the US company SteelMaster. To bring in natural light, the team added glazed doors, skylights and dozens of rectangular dormer windows.

Each unit features 23-foot-high (seven-metre) ceilings and up to 18 windows, with daylight flowing in from both the northwest and southeast.

The windows "capture the sunrise in the bedrooms and the sunset in the living rooms, which reflects off of the curved walls – creating an aura of ceremony and reflection", the team said.

Simple, interior finishes include white walls and concrete flooring. In the centre of each unit is a plywood service core that divides up the space. It contains a bathroom, closet and kitchen functions.

Outside, the site has a staggered pattern of trees that was inspired by sheet music for John Coltrane's album, A Love Supreme.

The grounds were created by noted landscape architect Julie Bargmann of D.I.R.T Studio. 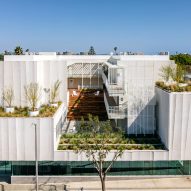 In addition to the trees, the landscape features a variety of low-upkeep native plants.

In lieu of traditional grass, the team planted clover, which attracts pollinators and helps prevent soil erosion. Walkways are made of terrazzo tiles that were salvaged from another development.

The Caterpillar's Quonset-hut design takes cues from an earlier project in the neighbourhood – True North, designed by local studio EC3, which consists of a cluster of Quonset huts made of steel and polycarbonate panels. That project was also backed by Prince Concepts.

The city of Detroit has been making a comeback after filing for bankruptcy in 2013.

Other projects in the Michigan city include a cedar-clad housing block by LOHA that was built in Brush Park, a formerly neglected area that is undergoing redevelopment. Elsewhere in Detroit, the New York office of OMA revealed plans to turn a commercial bakery into an art and education facility called Lantern.

The photography is by Chris Miele.