Brooks + Scarpa has completed an apartment building with a scalloped, textured facade in Los Angeles that offers affordable low-cost housing to young adults that are transitioning out of group homes.

Brooks + Scarpa was commissioned by a non-profit organisation, the Venice Community Housing Corporation, to redevelop the lot in Venice, CA where their offices were located to serve young adults who have been forced to leave youth facilities.

"When kids 'term out' as they say when they turn 18 years old and are forced to leave a youth facility, most wind up living on the street because there is no place for them to go," said the Los Angeles-based studio.

"Rose Apartments provides a home to this young adult who would otherwise be living on the street."

The 20,900-square-foot (1,942 square metres) building offers 35 affordable units. Most of these are studios, while some apartments have separate bedrooms. On the top storey, there is a single two-bedroom unit.

The design relies on a typical LA typology: at the centre of the building, there is an elevated courtyard, which acts as a semi-public space.

The units open onto this protected area, fostering a sense of community and belonging among residents.

"The courtyard typology has existed in Los Angeles for more than a hundred years," Brooks + Scarpa noted.

"It promotes pedestrian-oriented neighborhoods as an alternative to sprawl, creating usable space in the center of the project, instead of unused, leftover space outside of the building volume," the studio added.

The courtyard includes stepped wooden benches, in which the residents can enjoy the outdoors while being shaded by the surrounding building.

In addition to the residential portion of the project, the ground level has commercial spaces that create a variety of uses for the site, including 2,000 square feet (1,858 metres) of office spaces for the Venice Community Housing Corporation, which owns the land. 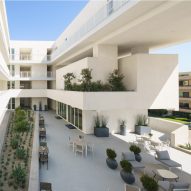 "The design team saw the site as a development opportunity to establish a mixed-use building that better related with the context of the urbanizing neighborhood than the previously existing one-story 1970s structure," said Brooks + Scarpa.

The all-white exterior materials include stucco and perforated mesh screens that have a scalloped pattern that shifts under the strong Southern California sun. All of the materials were selected for their durability and cost-effectiveness.

The apartments themselves feature simple finishes. They receive plenty of natural light, and most of them enjoy cross-ventilation, thanks to the central courtyard.

Brooks + Scarpa is led by Lawrence and Scarpa and Angela Brooks. The studio received the 2022 AIA Gold Medal, the organisation's highest honour.

Other projects completed by the studio include another all-white housing project in Los Angeles and a proposal for a Holocaust memorial in Florida made of angular planes joined together.

The photography is by Jeff Durkin unless otherwise indicated.