Amanda Levete's firm AL_A has received planning permission for a prototype fusion power plant in Oxfordshire, UK, which is being developed with Canadian energy company General Fusion and the UKAEA.

Designed to create "fusion conditions in a power plant-relevant environment", construction of the facility at the Culham Science Centre is set to begin later this year after being granted planning permission.

It is being developed by Canadian energy company General Fusion and the UK Atomic Energy Authority (UKAEA) as a demonstration facility for the technology, which aims to be a sustainable alternative to burning fossil fuels.

Created by AL_A in collaboration with engineering studio Arup, the building's form aims to express "the technological optimism of fusion".

The building will be focused on the 38-metre-high fusion hall at its centre, which will be wrapped in translucent fabric. According to the studio, this will allow the public to observe the process of fusion.

Surrounding the central hall will be offices, workshops and laboratories that have views out to the surrounding countryside. 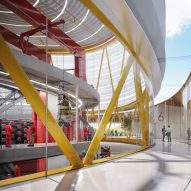 "The building will not only be highly efficient but one that expresses the technological optimism of fusion to solve the energy problems of the world," said AL_A founder Levete.

"The design projects a confident message to the public about the extraordinary potential of this technology. It represents a clear shift in the relationship between environment and industry, moving from one of opposition to one of symbiosis."

Fusion could create low-carbon energy as it requires only hydrogen as a fuel and only emits helium as a waste product. The process uses magnetic fields to confine hydrogen in the form of plasma that is injected into lead-lithium.

This sphere of lead-lithium is then compressed to create nuclear fusion, which heats the metal and is used to evaporate water into steam and drive a turbine that creates electricity.

Currently, the technology is in its infancy. The organisation plans to open the facility in 2026.

"General Fusion wants to transform how the world is energised by replicating the process that powers the sun and the stars," said AL_A when the project was first unveiled in 2020. "Their prototype fusion facility will be the first magnetised fusion facility in the world."

At the end of last year, US scientists made a breakthrough when they were able to generate more from the fusion machine than is needed to power it for the first time.

The visuals are courtesy of AL_A.