Architecture studio Bureau has used a rough concrete finish to disguise this small wooden cabin in France as a boulder, distinguishable only by a porthole-style window.

Named Thérèse, the structure is located in the rural grounds of contemporary art space Bermuda outside the town of Sergy.

Bureau, formerly known as Bureau A, conceived the project as a companion piece to its 2014 project Antoine – a cabin in the Swiss Alps that was also disguised as a boulder.

Both projects pay tribute to the work of Swiss writer Chales-Ferdinand Ramuz, whose novel Derborence tells the story of a shepherd named Antoine who becomes trapped under rocks following a landslide, shortly after his marriage to Thérèse.

"Thérèse was thought and built along the same lines as Antoine, creating interconnected dependencies of art and other travelling communities," said Bureau.

"Habitation is political here, as the two shelters are nowhere near commercial or speculative routes or agendas," it continued. "They offer a place to many outside any financial or economic considerations."

Nestled in a wooded area close to France's border with Switzerland, all that gives away the presence of the cabin is a single, large porthole-style window.

Underneath Thérèse's rough concrete exterior is a pyramidal timber structure, sitting atop light foundations that give it the potential to be relocated in future. 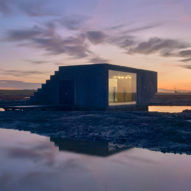 Inside, the cabin provides enough space for a single person to live comfortably, with room for a portable wood-burning stove, a table with benches and niches for storage.

Beneath the openable porthole window is a bench for viewing the surrounding landscape, alongside a ladder that leads up to a small mezzanine sleeping area.

Exposed timber panels line the entirety of Thérèse's interior and have also been used to construct the furniture, chosen to provide a warm contrast to the rocky exterior.

Bureau is an architecture, design and research studio led by architects Daniel Zamarbide, Carine Pimenta and Galliane Zamarbide, with offices in Geneva and Lisbon.

As well as the previously completed cabin Antoine, the studio's other projects include an inflatable PVC nightclub in Geneva that was designed to host the annual party of the Federation of Swiss Architects.

The photography is by Dylan Perrenoud.