Italy's undersecretary for culture Vittorio Sgarbi has stated that Milan's iconic San Siro stadium, which was set to be replaced by a Populous-designed building, will not be demolished.

The minister promised that the Stadio Giuseppe Meazza stadium, widely known as San Siro, "will not be torn down," reported online newspaper Milano Today.

At the end of December, Sgarbi said that his powers as undersecretary cover the San Siro stadium as a "heritage of contemporary architecture" and that he will submit an "issue of historical restraint" this month.

This would see the building protected against demolition based on it being a historical landmark. The year the demolition is set to begin, 2024, marks 70 years since a major post-war renovation was carried out at the stadium.

"I am convinced that the stadium should not be demolished, not so much for its architectural value as for the importance as a symbol and for the protection of memory," Sgarbi told Italian newspaper Il Giorno.

"For this reason, as far as I am concerned, I will take all the necessary steps to prevent it from being torn down."

However, Italy's minister of culture, Gennaro Sangiuliano, has stated that there are no restrictions on the stadium and that decisions about San Siro's future rest with Milan's mayor, reported Italian financial news website Calcio Finanza.

"The state of the art is this: at the moment, there is no constraint and it will have to be the mayor of Milan who decides what he wants to do, possibly also on the basis of 'sentimental' evaluations, given the reference to the iconic value as perceived by the football sentiment with which the superintendency itself invited alternative solutions to demolition," Sangiuliano said this month. 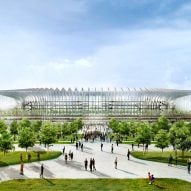 The stadium, which was designed by architect Ulisse Stacchini and built in 1925, was extended between 1948 and 1955.

In 1990, ahead of the World Cup in Italy, it was extensively remodelled by Milan studio Ragazzi and Partners.

Football teams Inter Milan and AC Milan, which share the stadium, announced in December 2021 that it would be demolished and replaced by a stadium designed by architecture studio Populous.

The new stadium would be part of a redevelopment of the site and would be built next to San Siro, which would then be torn down.

Called the Cathedral, the Populous stadium design was informed by two of Milan's best-known buildings, the Duomo di Milano cathedral and the Galleria Vittorio Emanuele shopping arcade. The area around the stadium would become pedestrian-only, with existing parking moved underground.

The San Siro replacement has previously been criticised by architects, critics and heritage bodies. In 2020, architect Angelo Renna suggested the stadium could be turned into a tree-covered coronavirus memorial.

The main image is by Prelvini via Wikimedia Commons.