The 17.8-metre-high office building, which the studio says is the "tallest mass-timber office building in central London", was built from a combination of beech, pine and spruce timber.

Constructed from structural timber, Waugh Thistleton Architects clad the exterior of the six-storey building in tulipwood timber louvres from the street level to the roof.

"The design means that you also get the beauty of the timber internally," Waugh Thistleton co-founder Andrew Waugh told Dezeen.

"It's a simple form driven by the context of timber engineering, as well as the context of the surrounding Victorian buildings – these were also constructed using current methods and built to a brief," Waugh added.

"There is no narrative here, it is pure modernism."

Waugh Thistleton Architects constructed the 4,480-square-metre Black & White Building from prefabricated components that were precision-engineered to be slotted together.

This means the building, which Waugh describes as "visibly sustainable",  is dismantlable and can be disassembled rather than demolished at the end of its life with its materials reused.

Its foundation and lower ground floor were made from concrete, with the rest of the structure constructed from cross-laminated timber (CLT).

Curtain walling was made from glued laminated timber (glulam), while columns and beams were constructed from laminated veneer lumber (LVL), which the studio said helps save on space.

"We're talking about typically, at the lowest level where the loads are greatest, about 100 millimetres on each side of the column saving in its dimensions," he added.

"That's made out of beech, which is a hardwood so it performs much, much better. [It's] smaller columns."

According to the studio, by using engineered-wood materials rather than a traditional concrete and steel structure, the building saves "thousands of tonnes in CO2" as it generates much less greenhouse gas.

The building also has at least 37 per cent less embodied carbon than comparable concrete structures, according to The Office Group (TOG). 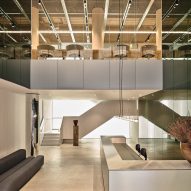 It was named the Black & White Building as it replaces an earlier building on the site, a Victorian brick warehouse with a timber interior that had been painted black and white.

The existing building was deteriorating and not suitable for a retrofit, Waugh Thistleton Architects said.

"It couldn't be extended – it was very small and had no foundations," Waugh said. "Extending it would have been just a cosmetic exercise. This isn't romance, it's architecture."

After meeting Waugh at a panel talk about sustainability, TOG co-founder Charlie Green asked him to instead create a new building that would be suitable for the site.

"We took our planning consented scheme, and we used the envelope and the massing of that to ask Andrew to create something within that form that's timber," Green said.

"He did more than that, he redesigned it so we had a more efficient core position to create a better flow of space, and came up with this timber scheme."

The office is partly powered by 80 photovoltaic panels on its roof, with all other energy coming from green suppliers, Green said.

Design studio Daytrip created the interior of the building, which contains 28 offices in different sizes as well as six meeting rooms, break-out areas and focus booths and a dedicated yoga and barre studio on the ground floor.

The building's timber features are also visible inside, where the timber walls match the wooden furniture.

"We reacted to the original concept and the sustainable drive and wanted to continue that in the interiors," said Daytrip co-founder Iwan Halstead.

"We wanted to respect and celebrate the timber part of the architecture."

Timber beams from the Victorian warehouse that previously occupied the site were kept and turned into wooden sculptures that decorate the ground-floor lobby.

Daytrip aimed to also keep the furniture as local and sustainable as possible.

"A lot of the specifications and furniture are UK suppliers and that was something that we wanted to make an effort to achieve, and we've done it with 80 per cent of the furniture," Halstead said.

The overall interior design was informed by Tokyo's original Hotel Okura, a mid-century modern hotel that was demolished in 2015 but has since been rebuilt.

A colour palette of muted green and earthy hues, which Daytrip gave names like "wasabi green," is combined with tactile materials, including some made from recycled components.

At the top of the building sits a rooftop terrace, while a central lightwell was designed to help maximise the building's natural light.

The building is "about sustainability more than anything," Waugh said. "It's a bright future for architecture, not the hair shirt and oat milk that sustainability is always described as."

TOG operates more than 50 workspaces in the UK and Europe. These include an office in Borough Yards with an interior by Danish designer David Thulstrup, and a Euston workspace with an interior informed by nearby buildings such as the British Library.

The photography is by Jake Curtis.