Copenhagen-based designer David Thulstrup drew on spice-making processes when designing the interior of London's Ikoyi restaurant, which features a variety of materials including copper and oak.

The 150-square-metre restaurant, which has a menu based on seasonal British produce and spices from sub-Saharan west Africa, is located inside the brutalist 180 The Strand building in central London.

Thulstrup completely renovated the interior, adding panels of a specially-designed metal-mesh weave that curve up from the restaurant's windows and cover the ceiling. The ceiling design was informed by the process of spice production.

"I was inspired by sifting spices and thought the mesh could both capture and reflect light coming from the outside, the street light in the evening and sunlight in the daytime, but also be respectful to the exterior," Thulstrup told Dezeen. "The lights from inside the restaurant will be captured and 'sifted' towards the street."

Thulstrup also layered materials to create a restaurant interior that references the "boldness and intensity of the gastronomy" delivered by Ikoyi's founders Jeremy Chan and Ire Hassan-Odukale.

The restaurant walls were lined with oxidised copper sheets finished with beeswax, while the floors were covered in Gris de Catalan limestone that was flamed and brushed to develop a hammered surface.

The custom-built furniture and built-in joinery were made from British oak, while banquettes, chairs and wall panels were lined with ginger-coloured leather.

"I always work with contrasts and I like honest juxtapositions of materials that activate your senses – the copper that is warm in colour but cold when you touch it, the warm natural ginger leather against the colder steel mesh and the rough Catalan limestone floor against the warm English brown oak," Thulstrup said.

The earthy, rustic hues chosen by Thulstrup for the interior were informed both by the restaurant's food and the building in which it is located.

"Ikoyi is placed on the ground level of the beautiful and very active brutalist building 180 The Strand," he said. 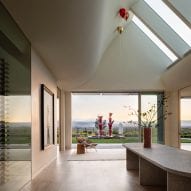 "The restaurant's gastronomy plays an essential role in the palette as well," he added. "It's not an interpretation of a dish but an exchange in colour and tracing ingredients back to their natural form and colour."

On arrival, visitors to the restaurant are also greeted by a large copper-clad fridge that shows the produce served at Ikoyi, with slabs of meat and fresh fish hanging from meathooks.

Thulstrup wanted the fridges to remind people of where their food is coming from.

"[The idea was] that we know where a piece of fish comes from and that we are aware what a piece of meat looks like," he said. "It traces the story back to when the animal was alive and underscores that we have to take good care of them and appreciate them."

"I thought it would be a modern interpretation and celebration of our awareness of food."

Thulstrup founded his studio in 2009 and it is based in Copenhagen, Denmark. The studio works in architecture, design and interiors.

Previous projects by the studio include an office in Borough Yards, London, and the revamp of a winery in California's Sonoma County.

The photography is by Irina Boersma.