Beijing architecture studio Crossboundaries has carried out "a full makeover" of a boat to create a tiny solar-powered house named Fàng Sōng.

Transformed from the client's existing houseboat, the 60-square-metre home by is moored in Berlin and features a series of interlinked, adaptable spaces.

According to Crossboundaries, Fàng Sōng is able to travel as far as 50 kilometres per day and is powered by solar panels.

"In essence, the project was a full makeover with the intention of maximising the benefits that the boat delivered," studio co-founder Binke Lenhardt told Dezeen.

"Lots of light, a fully functional but not really appealing bathroom, and most importantly the opportunity to take it for short and long trips within Germany and Europe," she continued.

"With enough space for up to two people as well as guests, it had the potential to easily become a personal retreat for re-energising, and a cosy getaway for friends and family."

While Fàng Sōng is moored in west Berlin, its owner uses it to travel across lakes and rivers around Europe, often relying only on solar panels to power the trips. On sunny days, it achieves an average speed of seven kilometres an hour.

"A set of solar panels covering the entire roof, as well as one additional panel on each side, make the boat self-reliant from March to November," said Lenhardt.

To make the most of the limited space, Crossboundaries incorporated multifunctional elements to create adaptable rooms within the boat. They are unified by waterproof rubber flooring and furnishings made from plywood.

A consistent red and yellow colour palette is used throughout, in reference to the Chinese imperial colours and to reflect the client's time spent in Beijing.

"We followed the logic of all transformational furniture elements being red on the outside, and once opened, revealing their yellow interior," said Lenhardt.

"This palette extended all the way to the kitchen and even the helmstand, with a central part cut out and executed in yellow."

A living area that opens onto the deck features a fold-out bed hidden within a partition wall. A wide sofa is positioned in front of it but designed to be lowered when the mattress is required.

Hidden behind this bed unit is a sliding door that can be pulled out to offer privacy when multiple passengers are on board. 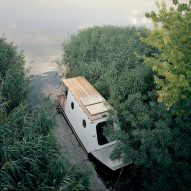 In the centre of Fàng Sōng's living room, Crossboundaries has used a floor panel to disguise an underfloor bike storage unit.

Another folding element in this space is the desk, which is built into a shelving unit in the corner to offer the client space to work without taking up valuable floor space.

Beyond the living room is a spacious bathroom, separated by walls covered in yellow tiles.

At the end of the boat is a kitchen with red cabinets and a removable dining table that can be attached in multiple ways.

At this end of the boat is also an additional folding bed, positioned to conceal the controls of the boat and give the house a more homely feel.

When pulled out, this bed projects out over the control deck and is surrounded by large windows offering views of the water.

Outside, Fàng Sōng's deck is furnished with a long sofa featuring patterned fabrics gathered by the client during her years of travel.

Other houseboats recently featured on Dezeen include a holiday home on Lake Tisza informed by fishing boats and a floating home informed by Japanese design in Amsterdam.

The photography is by Johanna Link.