Montreal-based Ivy Studio has turned a former print shop into offices and creative spaces, with a "work in progress" aesthetic punctuated by colourful moments.

MAD Collectif organises global fashion, art and design events, and after rebranding from Groupe Sensation Mode in 2022, the company decided to look for a new base location for its team.

Eventually, it found a 3,600-square-foot (334-square-metre) space on the ground floor of a two-storey building in The Village area of Montreal, which became the MAD Creative Hub.

"The objective for the new location was to focus on creativity and collaboration and for it to be used not only by their team internally but also by their multiple partners and collaborators – a flexible space made for sharing ideas and working together," said Ivy Studio.

Built in 1939 as a print shop, the long space only has windows on its street-facing facade.

This dictated a layout where public areas are located in the front, while private rooms are situated towards the back.

A two-foot difference in the floor level helps to define these two zones.

In both areas, colourful accents including vintage sofas and chairs stand out from the existing walls, plumbing and ventilation equipment which were all painted white.

Spaces are intentionally meant to look unfinished, with exposed metal studs, track lighting and unpainted metal door frames all adding to this appearance.

"The 'work in progress' aesthetic makes it feel as if the place is undergoing a constant evolution and mirrors the brand's new forward-thinking approach," said architect Philip Staszewski, one of the four Ivy Studio co-founders.

A banquette follows the wall and runs underneath the window, its cushions covered in textured purple velvet.

Pink and orange poufs accompany galvanised steel tables, and lilac bar stools serve the counter, together providing a flexible and informal space for employees and events.

On the other side of an enclosed stairwell that divides the plan is another naturally lit area used for photoshoots, exhibits or pop-up shops. Comfy purple chairs offer additional seating here. 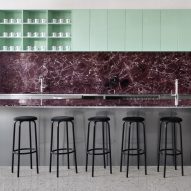 A 16-foot (4.9-metre) ramp leads up to the raised level, where rows of open desks are positioned next to the periphery walls.

"The ramp leading towards the back is meant to be an experience of its own," said Ivy Studio. "The narrow ceramic-clad passage is placed beneath a series of linear lights, giving the impression of walking down some version of a runway."

The insulation helps to soundproof the small rooms for employees taking calls, particularly during events or parties taking place in the front.

Ivy Studio has completed several projects in its home city, each playing with colour in a different way.

They include a restaurant with a green marble pizza oven, a co-working office featuring mint green and burgundy hues, and a spinning studio dominated by black.